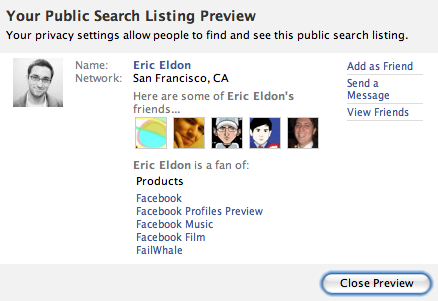 There’s an entire industry built around getting web pages to appear higher in search engine results. Social network Facebook is moving deeper into it. This weekend, the Palo Alto, Calif. company has begun what looks to be a roll-out of a new public view of your user profile, intended to send search traffic to official Facebook advertiser “Pages.”

When you join a Page, you’ll soon have a link to that Page appear in the public version of your Facebook profile, apparently. Your public profile is already indexed by search engines and already appears in search results. For many of Facebook’s 120 million users, it appears in the first ten results when others search for their names. But so far, this public profile has just included your name, your profile picture, random images of friends, and ways for the person who searched for you to add you as a friend.

Now, for example, each public profile of each Facebook user who’s joined U.S. president-elect Barack Obama’s Page, would soon include a link from their public profile to the page (and there’s 3,160,820 of them so far).

The new Pages links aren’t live on search results yet, but you can preview them in your Facebook profile settings (you can also set your profile to not appear in search results, but my impression is that not many people do this.)

Search engines like Google typically look at how many links are going to a web page in order to determine its ranking. The more links, the higher the page appears in a search result. So expect Barack Obama’s Page to shoot up in search rankings, along with any other Page that has a lot of Facebook users as fans.

Given Facebook’s continued growth around the world and its wide range of efforts to make money, this seems like a very smart move. Any company can build a page for free, but then they pay to build add-on services connected to Pages, including advertising on other parts of the site that directs users to join Pages. Thus, these new public links that each additional fan will generate for a Page are an added incentive for companies to pay Facebook for other ad services. 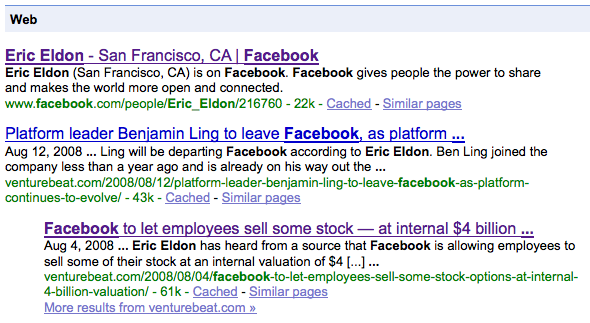 Because of Facebook’s size, and the popularity of many Pages, this latest change could send hundreds of millions of links from Facebook profiles to Pages, as Justin Smith estimated after he spotted the changes this weekend.

Currently, MySpace and Twitter pages for Obama appear higher than Facebook because both sites make Obama’s accounts publicly available on those sites. Because almost all of Facebook is closed from being indexed, it hasn’t been able to take advantage of search engines to the same degree. Facebook is orders of magnitude larger than Twitter, and it passed MySpace this summer to become the largest social network in the world. So when it fully rolls out this new profile system, it could have a big impact on Google.

Google uses a wide variety of methods to figure out the order of search results. It doesn’t disclose these methods, and when it makes changes, sites can arbitarily gain or lose rankings. Given that Google has its own sort of user profile slowly under development, one has to wonder if it will make changes to prevent Facebook’s profiles and pages from continuing to move up in results.