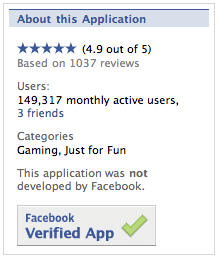 Facebook wants third parties to build applications for its site that are “Meaningful,” “Trustworthy” and “Well-Designed” — as it laid out in a somewhat vague set of principles this summer. Today, it’s providing more specifics about how it aims to rewards applications that meet its standard for one of those: Trustworthiness.

It is launching a new initiative called the Application Verification Program, that it first mentioned at its developer conference last summer. Apps apply to be in the program, and are judged based on the company’s trustworthiness criteria, which include being “Secure,” “Respectful,” and “Transparent.” Verified developers will get a series of benefits, the company tells me. On the product side, these include the ability for an app to let users send more invites and notification to friends, and greater promince of app activity in news feeds. Developers will also be able to put a “Verified App” badge on their apps, and in the site-wide app directory. On the business end, they’ll get a discount on tickets to Facebook’s annual developer conference, and a $100 credit for purchasing ads on Facebook.

Today, though, Facebook is only accepting contact information and application names from developers who are interested in the program (here). The second step, which will start happening in the coming weeks, will involve app developers submitting screenshots, information about how they make use of user data, and other ways that their apps function with the Facebook site. Apps should specifically make use of Facebook’s ten main integration points, such as emails from apps to users. More details, here:

The cost of that application will be $375 for non-students, for-profit developers; money the company will use to cover the cost of reviewing the apps, it tells me. Students and non-profits will pay a discounted fee of $175. The benefits for selected winners will go into effect sometime early next year, the company says, once it has assembled enough winners.

Facebook also announced its “Great Apps” program this July, and the first two were named in August: Causes and iLike. While the verification program focuses on trustworthiness, “Great Apps” are apps that embody all of the principles in the company’s extensive criteria, including various ways that apps should be “Meaningful” and “Well-Designed”. That program is meant more to exemplify the very best apps, and it includes additional benefits. However, the company isn’t disclosing more details about that program at this time.