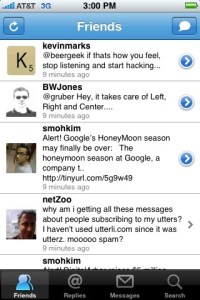 Late last week I wrote up Tweetsville, a new iPhone Twitter client app. I noted that it was different from the the other iPhone Twitter clients Twitterific, Twinkle and Twittelator in that its user experience was simple yet solid. I wrote that this would be the one Twitter app that I actually would use.

Now don’t get me wrong, I like Tweetsville just fine, but in its current state, it is way to slow to use. After a day or so of testing I didn’t notice it too much because I was using it regularly enough that I never had that many tweet (Twitter message) updates to download. But if you fail to use it regularly for even just a few hours, it’ll take forever to load up new message. This really shouldn’t be the case as these are just text-based message (of 140 character or less!), but it is.

Perhaps more importantly though, I’ve found a better iPhone Twitter app: Twitterfon. After my post, a few people emailed me asking me to check it out, I did — it’s great. Not only does it have much of the same features and user experience of Tweetsville, it has one killer feature: It’s free.

While I thought Tweetsville’s $3.99 price was a small one to pay for an app I planned to use all the time, free is an infinitely better price. But that wouldn’t matter to me if Twitterfon suffered from the same slowdown on data load — but it doesn’t. Whereas Tweetsville can take over a minute to a few minutes to load in your data, Twitterfon takes just seconds.

Twitterfon has been around for a while, but it was previously riddled by several bugs. The newest version (1.2.1) which just launched, has corrected several of those. So it’s probably fair to think that Tweetsville will correct its issues with subsequent updates. But that $3.99 versus free aspect will remain.

The developer behind Tweetsville, Ed Voas, wrote a blog post about the process of developing Tweetsville before selling it to iPhone app development house Tapulous. Interestingly enough, Voas sold it so he could go back to work for a little company named Apple.