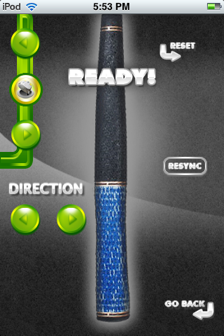 Gaming company SGN has a strategy that has worked so far with iPhone and iPod touch games: Use the device’s accelerometer to create simple sports games similar to one that have been made popular on the Nintendo Wii console thanks to the accelerometer in its Wiimote controller. It’s taking that approach to the next level with iFun, a new accelerometer-based gaming experience for the iPhone platform.

Basically, iFun allows you to use an iPhone or iPod touch as a remote control to control action on a computer screen. Yes, it’s just like the aforementioned Wiimote. The first game to use it is iFun Golf. Here’s how it works: You log on to the game in your web browser on either a Mac or PC. Then you load up the iFun app on your iPhone or iPod touch. Assuming you’re on the same network as the computer, these two devices will sync with one another (I didn’t even need to sync them in my demo, they automatically did).

You will then choose what level you want to play on the computer, and it will load up a golf course. On your iPhone/iPod touch screen it will let you select a golf club to use and give you options to tweak your shot for different angles. When you’re ready, you hit “Ready!” and swing the iPhone/iPod touch just as you would a golf club. Once you do that, the ball on the computer screen will be hit based on your movements. It works very well.

Of course, you have to worry about possibly throwing your iPhone/iPod touch when you do this. Nintendo got in some trouble following the launch of the Wii because some people were losing their grips on their controllers. Nintendo actually had to released new arm straps and controller body gloves for free to customers to offset these problems. If these type of iPhone/iPod touch games catch on, this problem will be about 10,000 times worse because these devices really weren’t meant to be used as video game controllers in the same sense as the Wiimote was.

iFun will be available for free (hopefully tomorrow) in the App Store. (Also notice my awesome golf shorts in the bottom video.)