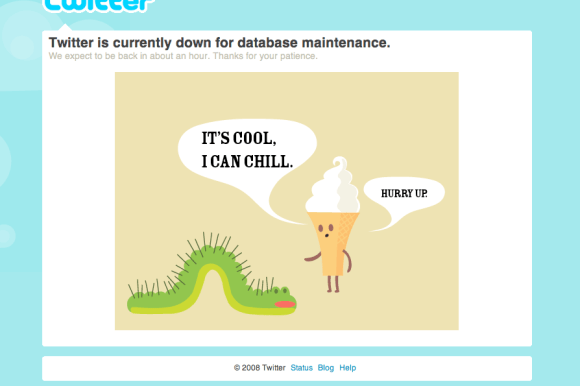 Twitter has been having issues all day today (you know, just like the good old days). But right now, instead of the typical Fail Whale picture (shown when Twitter is down), there is a database maintenance message and a picture that I’ll describe as a caterpillar being yelled at by an ice cream cone.

This downtime seems to be unplanned as (at press time) there is neither a post about it on the Twitter Status blog or the regular Twitter blog. Perhaps Jerry Yang leaving Yahoo brought it down, or maybe it was the awesome Google Voice Search app for the iPhone.

According to the message, Twitter thinks the service will be down for about an hour. Any longer and the natives will go restless and tomorrow we’ll have 200 posts about a new “Twitter-killer.”