EnerG2 Inc., an ultracapacitor startup that has kept quiet until now, is launching today with the official announcement that it has raised $8.5 million in its first round of financing. Founded in 2003, it has spent five years developing electrode materials that it claims can boost the performance of ultracapacitors, devices that are useful in electric cars and smaller electronic devices.

Unlike batteries, which store electricity chemically, ultracapacitors store energy as electrical fields and physically separate the positive and negative charges with an insulator. Some describe ultracapacitors as “mechanical batteries“, attractive for their ability to deliver large bursts of power, charge and discharge quickly and efficiently and last through many more cycles than batteries, as well as tolerate changes in temperature, shocks and vibration. And where a traditional battery lasts about 1,000 cycles (one charge and discharge), an ultracapacitor could last 1 million cycles or more, according to Rick Luebbe, EnerG2’s chief executive.

But low energy density, or the energy stored per kilogram, has long been a shortcoming of ultracapacitors compared to batteries. So a power tool that might run for 30 minutes on a lithium-ion battery and take two hours to charge –- and need replacing every few years – might run for only five or 10 minutes on a similarly-sized ultracapacitor, but would charge in 60 or 80 seconds and last the life of the tool, Luebbe said. 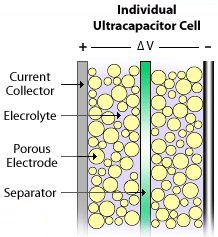 EnerG2 thinks it can help make ultracapacitors more attractive by boosting their performance and making them cheaper, both on a dollars-per-kilowatt and dollars-per-watt-hour basis, he said. The company didn’t say how much it expects to cut costs, but Luebbe said the electrode materials, the company’s specialty, are one of the largest cost components.

Working with technology initially developed at the University of Washingon, EnerG2 has taken the pure activated carbon typically used in today’s ultracapacitor electrodes, the plates that hold the electrical fields, and restructured it at the nano level, increasing its surface area and making it more porous so that ions can flow more easily, he said.

Despite the improvements, EnerG2 isn’t targeting ultracapacitor applications that compete head-on with batteries, at least at first. Even with its new materials, ultracapacitors won’t approach the energy densities of batteries, so the company has set its sights on applications where other attributes, such as power density, cycle life or fast charging, are more important.

Instead, there are many applications to go after where ultracapacitors already have a place, such as electric rail systems that capture the energy released when a train brakes coming into a station and uses the energy to help start the train up again. That requires an energy-storage device to charge and discharge so many times that no battery can handle it, Luebbe said.

Industrial applications involving kinetic energy are another natural fit, he said. For example, systems that turn the motion of cranes, forklifts or elevators into electricity could take advantage of a storage device like ultracapacitors, again because of their ability to charge and discharge rapidly over and over again.

“Capacitors have difficulty [reaching more than] 5 watt-hours a kilogram, and lithium-ions today can reach 20 or maybe 30 times that or more,” he said, speaking roughly. “There’s a big gap here, and as lithium-ions are able to do higher and higher power, it will be difficult for capacitors to find their appropriate niche.”

Aside from the industrial and electric-rail applications, EnerG2 plans to sell materials for ultracapacitors in hybrid-electric vehicles, consumer electronics, power tools and backup power in data centers, telco switching stations and even the grid, he said.

It should have plenty of potential customers. Big companies making ultracpacitors now include Panasonic Corp. and Okamura Laboratory Inc. in Japan and NessCap Co. in South Korea. The United States’ Maxwell Technologies is also going after the transportation market, along with APowerCap Technologies and EEStor.

EnerG2’s next step is to get the materials accepted into its ultracapacitor customers’ manufacturing systems, Luebbe said, adding that he hopes to see the first shipments in the second quarter of 2009; he says the company already has the ability to make “fairly good amounts” of electrode material. Later, it also plans to develop new materials for other energy-storage devices, including lithium-ion batteries, as well as natural-gas, methane and hydrogen storage.