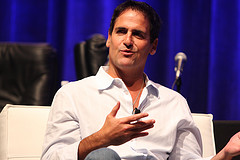 Billionaire entrepreneur Mark Cuban has fired a salvo back at the Securities and Exchange Commission today, after it charged him with insider trading yesterday. Cuban broke his legal obligation to keep financial information confidential regarding a company he had invested in, publicly traded search engine Mamma.com, the SEC complaint claims.

Cuban sold his shares in the company in June of 2004, upon finding out it planned to offer a new stock offering that would dilute his ownership stake.

Now, Cuban has published a memo by his legal team on his personal blog, implying that he wasn’t legally bound to a confidentially agreement. The memo then goes on to question why the SEC stopped a long-running investigation into other Mamma.com securities violations to start interviewing executives about Cuban’s own actions.

This follows a 2007 email published by the New York Times yesterday, purportedly from an SEC official to Cuban: The official accuses Cuban, an American, of acting unpatriotically towards his country because he financed a movie that was highly critical of President George Bush. Cuban has separately bankrolled investigative reporting into the SEC’s failure to regulate the finance industry over the last decade.

RE: SEC Civil Action in the United States District

The SEC knows their case centers on one telephone conversation between two individuals- 4 years ago. The SEC claims there was an agreement between these parties to the conversation to keep certain information confidential. We interviewed Guy Faure, the former CEO of Mamma.com Inc., with whom the SEC claims Mr. Cuban made an agreement. We had a court reporter transcribe the interview. There was no agreement to keep information confidential. Here is a relevant excerpt from the interview with Mr. Faure:

1) Q- We spoke earlier about you were telling Mr. Cuban in words or substance : “I have confidential information for you”.

2) Q- Do you recall anything Mr. Cuban said in response or reply to that statement by you ?

The SEC knows this-they have the transcript, yet they brought the case anyway. Why? Do they have a different statement from Mr. Faure ?

Why did the SEC end their multi-year investigation of Mamma.com Inc. for alleged securities laws violations days before interviewing present and former Mamma.com Inc. executives about this matter? Was the timing a coincidence? We think not.

If the question is why the SEC is going after Cuban for the $750,000 he saved by selling his Mamma.com stocks early — four years after the fact — the answer is increasingly looking like insider political influence.

Of course, the charges filed against Cuban must be judged on their own merits, regardless of why the SEC may be going after him. The SEC will need to show that Cuban did in fact break a legal obligation to maintain confidentiality. The law-professor bloggers at the Business Associations Blog explain why even doing that may be tricky:

Mamma.com clearly expected Cuban to keep the information confidential, but did their relationship “imply such a duty”? Cuban, after all, is not “an underwriter, accountant, lawyer, or consultant working for the corporation.” Nor was his stock ownership enough; at 6.3%, he probably would not be deemed a controlling shareholder.

This is a potential real problem for the SEC. Under Dirks, “the individual must have expressly or impliedly entered into a fiduciary relationship with the issuer.” SEC v. Ingram, 694 F.Supp. 1437, 1440 (C.D.Cal.1988)