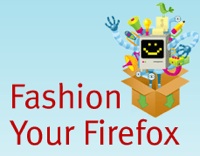 With the launch of a new site called Fashion Your Firefox, Mozilla is pushing to make normal users more aware of the add-ons available for its Firefox web browser.

There are already plenty of ways to find new add-ons (software you install to add features to your browser, such as a mini map sidebar or a space to get twitter updates). There’s a semi-comprehensive listing of add-ons on the Mozilla web site, as well as a recommendation window you can bring up in the browser itself. But both options seem better suited for users who know about and are interested in add-ons already. Fashion Your Firefox, on the other hand, is pitched at the mainstream. Instead of trying to list a broad range of add-ons to meet every possibly need, the site focuses on a relatively small number of categories (such as “social butterfly”, “digital pack rat” and “decorator”), then singles out just a few add-ons within each one.

Fashion Your Firefox could be a good introduction for users who want to dip their toes into the add-on world. They can find and download some of the best offerings, then if they like their improved browsers, they can go elsewhere to dig deeper.

Something like this is definitely needed to bring add-ons to a broader audience. Mozilla reports 1 billion Firefox add-on downloads so far, but anecdotally, it doesn’t feel like the concept has taken off among casual users. I don’t know anyone who has more than a few add-ons installed. I have to install plenty of add-ons so I can write about them, I uninstall them just as infrequently to keep things uncluttered.

When VentureBeat covers startups whose main product is a browser add-on, we invariably ask about the limited audience. It’s also worth noting that recent announcements from two companies featured on Fashion Your Firefox, as well as in Mozilla’s announcement, involve reaching a bigger audience than the add-on crowd: Discovery service StumbleUpon no longer requires an add-on, while Cooliris can bring its 3D media browsing experience to any website as an embeddedable wall.

I have some quibbles with how Fashion Your Firefox works right now. For one thing, there should be a prominent link to Mozilla’s full add-on listings so there’s an easy transition to the broader range of software out there. And maybe it doesn’t need the promotion, but I was disappointed at the absence of Google Gears, which I consider the most powerful add-on of all. Lastly, a newbie-friendly site like this one can’t completely overcome the fact that users hesitate before installing new software.

Nonetheless, if I was an add-on developer, I’d be doing whatever I could to get listed on the site.