Citysearch, the local listings and review site owned by media conglomerate IAC, is unveiling a test version of its new site today as it tries to stay competitive with up-and-comers like Yelp, as well as the increasing amount of local information available from Google, Yahoo and Microsoft. The most exciting new feature involves integrating your Facebook account into Citysearch, but, chief executive Jay Herratti says the new site isn’t just becoming more social, but more local, more balanced and more mobile, too. 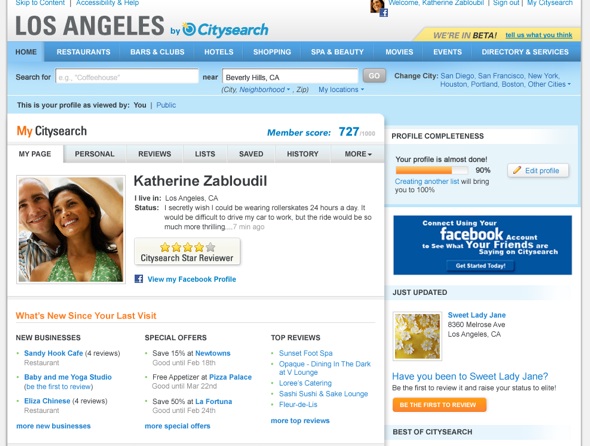 The Facebook integration comes via Facebook Connect, the service that allows other sites and services to access data from the social networking site. Citysearch was announced as a Facebook Connect launch partner back in July, making it the first local search site to use Connect. Herratti gave me a quick demo of the social features this afternoon, while there’s nothing revelatory, they’re still pretty compelling: When you browse the site, Citysearch can prioritize content written by your Facebook friends; you can import your Facebook profile into Citysearch; and you can also share your Citysearch reviews on Facebook and have them show up in your news feed.

These features are a nice fit for a local listings site, where the whole point is to drill down on the most relevant information, and where a big concerns is figuring out which user-written reviews you can trust. The site is working to provide similar integration with MySpace and OpenSocial, Herratti says.

Citysearch will also try to provide more relevant information by focusing on individual neighborhoods, rather than entire cities. This leads to a huge increase in Citysearch pages, from 140 city guides to a combined 70,000 city and neighborhood guides. Of course, the narrower you go, the fewer listings included in each guide, but that could mean it’s easier to find the business you’re looking for. Meanwhile, the “balance” that Herratti mentioned is between user reviews, editorial content and information from the business itself — Citysearch has taken a very literal approach to that idea by dividing each listing into three equal columns, one for each of “the three voices”, as Herratti calls them. 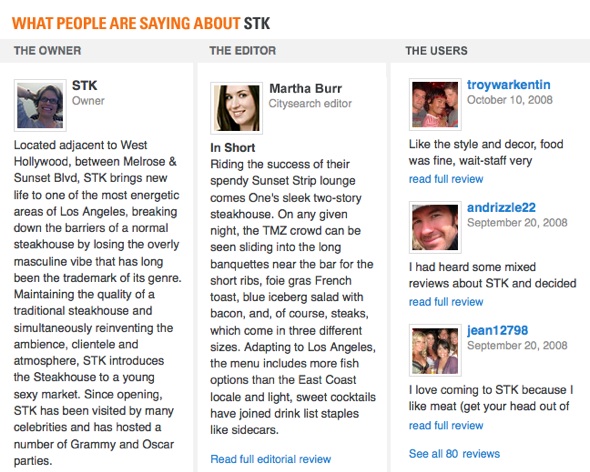 Finally, Citysearch is launching a new mobile site today, which allows users to write reviews from their phones. A standalone iPhone application should be available by the end of the year, Herratti says.

I was pretty impressed by what I saw in my whirlwind tour of the new site, and I’m looking forward to exploring it for myself. But I was also a a little concerned about Citysearch’s business model, since advertising (the source of the site’s revenue) is predicted to fall dramatically over the next few months.

“To be honest with you, as of today, we don’t know,” Herratti says — display advertising has been falling, of course, but that only makes up a small part of Citysearch’s revenue. Local advertising, meanwhile, has actually been rising for the past three months.