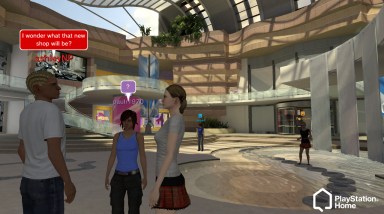 Sony has started setting the stage for the launch of its Home virtual world. The company has been running beta tests with thousands of users for weeks now, and the formal launch is still expected to be this fall on the PlayStation Network.

About 18 months in the making, Home is Sony’s “Hail Mary” play in the console battle with Nintendo and Microsoft. It will test whether gamers really want a layer of social networking served on top of the games they play on the PlayStation 3 game console. By contrast, Microsoft and Nintendo believe that gamers might talk to each other via cute little characters. But Sony has built a full-blown virtual online space. The graphics of the characters look good. But they don’t really move their lips or express themselves physically; that’s something that will change over time.

Susan Panico, senior director of the PlayStation Network at Sony’s U.S. game division in Foster City, Calif., said that Sony isn’t the first to market, but it has a big opportunity with Home because consumers already trust the Sony name. While Home could have been many things, Sony decided to focus the content around playing games and the culture around them, said Jack Buser, director of Home for the U.S. game division.

“It’s really a 3-D social network for gamers,” he said. 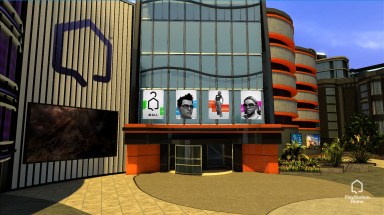 While it’s not exactly a world like “World of Warcraft” or Linden Labs’ “Second Life,” Home is the most ambitious push by any console maker into creating a virtual world for gamers. It will live or die on whether it’s simple, fun, and deep enough for gamers who have plenty of other things they want to do — like play games. And the price is right: free for those who have a PS 3.

The PlayStation Network — which has 13 million PlayStation 3 and PlayStation Portable registered users — is tightly integrated with Home. The PSN is the network that gamers use to play each other in online matches. They can also use it to download games or videos to the hard drives of their consoles. It has the records of a player’s achievements (trophies) in games, such as the number of victories in an online game. 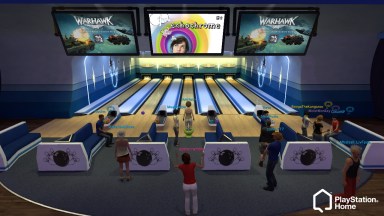 The architecture of Home is different from Second Life and World of Warcraft. Both dedicate a considerable amount of computer and storage firepower to maintaining a continuous world with geographic parameters. That is, if you buy a house on the corner, it will always be on that corner, next to something else. 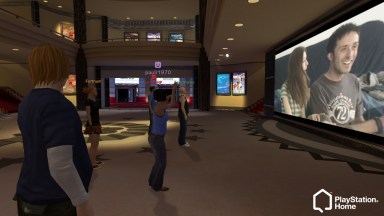 You communicate with other avatars by moving next to them and typing words. It’s not so easy doing that with a game controller. But you can plug a universal serial bus keyboard into a PS 3, and you can also use any Bluetooth head set to talk as well. At some point, you will be able to walk up to a group of friends and spawn a multiplayer game.

In the movie theater, you can go into a room and see what’s playing. You can actually watch that movie with your avatar in a social setting, making comments about it that others in the theater can see. That turns movie-watching into an online social experience. The closed beta is restricted to those 18 years and older now, while the open beta will allow anyone 13 and older. There is a profanity filter, and Home will be compliant with the PS 3’s own parental controls.

The version the Sony folks showed me was still incomplete. Sony hasn’t mentioned a release date yet, but Panico says an open beta will start soon. There aren’t many people around in it now. I imagine it will be fun once there are millions of people, all creatively expressing themselves through wacky avatars. But I expect it will be rather lonely and boring at the outset. It will also grow more interesting when partners like Electronic Arts start building out features such as an EA Sports fan space. Publishers, brand owners and media companies are all creating their own spaces inside Home, Buser said.

He said that Home will constantly change, with some things disappearing if they become less popular, and new spaces appearing as they are built. He said Sony will listen carefully to community feedback as it expands the service.

“Home is a living, breathing space,” he said.