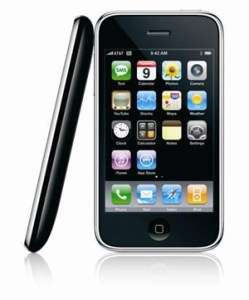 Games have come of age on the iPhone, and they’re about to get a lot better. The holiday line-up of game titles being released on Apple’s phone shows that developers consider it a solid platform for games alongside other dedicated gaming devices. Nintendo will have to look over its shoulder.

The iPhone 3G’s stunning success in the past 120 days has highlighted the success of the gaming sector. Apple has said it’s had more than 200 million downloads from its App Store since the store debuted in July. Of 8,000 applications on the App Store, more than 1,500 are games. Just two months ago, there were just 900 games. Exact game sales aren’t available, but titles such as Sega’s Super Monkey Ball and Electronic Arts’ Spore Origins (the latter developed by Tricky Software) games have had the No. 1 spots as most popular iPhone applications.

This is huge progress for Apple, given that games on the Mac have had a checkered history. Just as with other applications, the best games would always come out on Windows PCs or the consoles first, with Mac versions trailing by a year or more. For years, 3-D graphics on the Mac were far behind the 3-D cards on PCs. 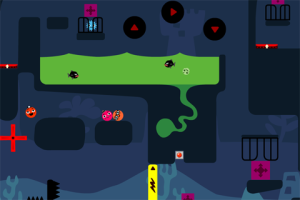 With the launch of Windows Vista, Microsoft actually started losing some users to the Mac. EA noticed and launched a policy of releasing many titles on the PC and Mac at the same time. Games on the iPod also took off, particularly with the launch of the iPod Touch, a version of the music player with the same rich multi-touch display of the iPhone.

But Apple realizes that the iPhone 3G is an outstanding game platform, thanks to the multi-touch display, great sound, good graphics, and the accelerometer-based tilt feature. Nintendo’s DS handheld doesn’t have tilt or multi-touch, and its graphics and sound aren’t outstanding.

Nintendo still has a huge edge, with an installed base of 85 million DS units sold versus Apple’s 12 million or so iPhones. People buy the DS as a dedicated gaming device and it’s had hits such as Brain Age and Nintendogs that have expanded the reach of the device beyond just gamers.

Aware of the competition, Nintendo isn’t just reaping DS profits. It will launch a new version, dubbed the DSi, in the U.S. market next year. That version will have two web cams and the ability to play AAC music (a high-quality music file format)  files. Nintendo considers the latter to be aimed at enhancing games, not playing songs the way people do with iPods. Nintendo will have a digital distribution solution, allowing players to buy games and download them via Wi-Fi to the Wii (and then transfer them to the DSi). The DSi will also have a larger screens, at 3.25 inches. The gestures in Apple’s direction are telling.

I know that Nintendo has been worried about this awakening at Apple. In a couple of ways, the iPhone is a better gaming device than the DS. The tilt feature adds the same kind of ease-of-use to the iPhone that the accelerometer-based sensing system has for the Nintendo Wii. And game developers are exploiting the features. Since games developed for the iPhone also work on the iPod Touch, Apple has a sizable market that is big enough for developers to target. 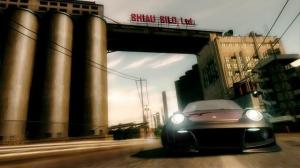 EA has had great success with the five iPhone games it has launched on the App Store, said Patrick Gunn, a marketing director at EA Mobile. The company is launching a new Need for Speed Undercover game in December on the App Store. The $9.99 game has a bunch of tracks and the ability to choose from a number of customizable cars.

Unlike driving games on the DS or Sony Playstation Portable, it’s actually really easy to play. The speed stays constant, giving the player fewer controls to worry about. To turn, you simply tilt the iPhone one way or another. If you need a speed boost, you tap a button with your finger. You can use several different methods for driving, including tilting. The game graphics look cool — with lighting effects and reflections — and the sound blasts rock tracks.

Gameloft, owned by the Guillemot brothers who run Ubisoft, has embraced the iPhone more enthusiastically than any other game company. It has 18 titles now, with five or six more coming by the end of the year. Among them is a Ferrari GT Evolution driving game. This one isn’t as good looking as Need for Speed Undercover, but it has 33 different types of Ferrari cars to race. It’s likewise easy to control and play; you can actually control the sensitivity of the tilt function so you can take sharper turns if you prefer. The game will ship in December for $9.99.

It remains to be seen where the prices for games will settle. There are a bunch of free games already, some with ad-based business models. Others are mini games with 99 cent prices, such as Topple from Ngmoco. Rolando, an upcoming game from Ngmoco, will debut at $9.99. Ngmoco, founded by EA veteran Neil Young this spring, is an example of the developing iPhone game ecosystem. The company is funded by Kleiner Perkins’ iFund — dedicated to investing $100 million in iPhone-related companies — and it’s one of a number of iPhone application companies that have been formed recently. 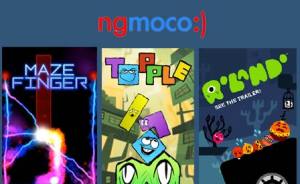 The company’s first two games, Maze Finger and Topple, have been downloaded more than 1.5 million times and more than 7 million game sessions have been played, Young said. Ngmoco expects five more games to launch before the holidays. Rolando is a deep game with 36 levels and wide variation in its game play. And it’s an iPhone/iPod Touch exclusive.

These kinds of games and the gaming feature of the iPhone are far better than some other platforms. I’ve played Pac-Man, for instance, on the T-Mobile G1 phone with Google Android software. That phone, built by HTC, has an accelerometer and a touch screen as well. But the accelerometer-based game isn’t all that responsive. And the touch screen on the G1 doesn’t work that well. When I swiped sideways to get the Pac-Man character to turn, the game would fail to recognize the gesture. The unresponsive touch-screen is very frustrating.

There are dozens of games available for free on the G1. One of my favorites is Fishocopter. In that game, you play a fish trying to stay away from predators and other obstacles. You control the fish as it swims sideways by using the pointing ball on the G1. That particular way of controlling the fish works for this game just fine. Of course, the try-then buy business model for this game just doesn’t work.

As I said, the iPhone offers a far better platform for game developers. To me, this is an exciting new branch for the gaming business. Already, game companies are saying the sales on the AppStore are dwarfing their sales on other mobile platforms. I’m looking forward to new kinds of games that take advantage of the iPhone camera or its location technology. Watch out, Nintendo. This game is just getting started.