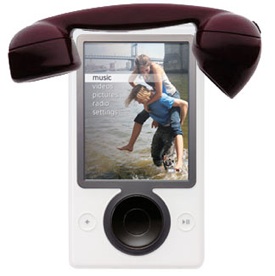 While Microsoft has been laughably trying (and failing) to chase down Apple’s iPod digital music player with its Zune device, a much bigger fish has risen from its rival: The iPhone. It could easily be argued that if Microsoft wants to do hardware, it should focus its efforts on the mobile market, a space where it’s only been pushing software to date — its increasingly outdated and badly outgunned Windows Mobile platform. If a report by English tech journal The Inquirer holds any water, Microsoft will have a phone … soon.

Of course, you have to take this report with a grain of salt. The Inquirer claims that the Microsoft phone, made with graphics chip maker Nvidia, will be unveiled at the 3GSM conference in February. That’s right around the corner, yet seemingly no one has heard anything about this device until the report. Neither Microsoft nor Nvidia are known to run tight ships when it comes to new products, so it seems unlikely that something wouldn’t have leaked out earlier about this device/partnership.

Also calling the report into question is the inference that the phone will likely hit the streets sometime shortly after being unveiled. That, again, seems very unlikely.

Most importantly, The Inquirer has been wrong on a number of rumors in the past, including ones that Nvidia would exit the chip set business and that Nvidia would see additional layoffs — layoffs that never happened.

Sources tell The Inquirer that the Microsoft phone would use the Nvidia Tegra chip. This chip is being aimed at the internet-enabled handheld device market and has some serious power when it comes to graphics.

One thing that’s interesting is that while Nvidia made the graphics chips for the first Xbox, Microsoft switched to its rival ATI to make the chips for the follow up Xbox 360. Also of note is that Apple and Nvidia seem to have a good relationship following Apple’s decision to include their chips in the new MacBook line.

While this report may or may not have something to it, one way or another, I’m still betting that Microsoft gets into mobile hardware.