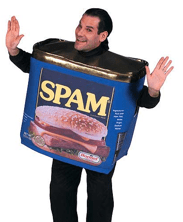 Spam marketing messages on Facebook have been getting worse over the last year as the site has grown — but maybe such spamming is about to stop. On Friday, the company won a court battle against spam perpetrator Adam Guerbuez and his front company, Atlantis Blue Capital: An $873 million award it will likely never be able to fully collect. You can download the ruling here (PDF).

Ads included objectionable (if not inaccurate) material for things like “legal marijuana” and male enhancement products. Samples below the article.

The civil action was filed under the Controlling the Assault of Non-Solicited Pornography and Marketing Act (CAN-SPAM), a 2004 law that, among other things, prohibits false or misleading marketing emails. Guerbuez’s messages were sent by fake or compromised Facebook accounts, using the site’s messaging system — such messages are being interpreted by courts as applicable to CAN-SPAM.

Does Facebook expect to quickly collect $873 million and share the proceeds in some way with our users? Alas, no. It’s unlikely that Geurbuez and Atlantis Blue Capital could ever honor the judgment rendered against them (though we will certainly collect everything we can). But we are confident that this award represents a powerful deterrent to anyone and everyone who would seek to abuse Facebook and its users.

Guerbuez is based in Montreal, Canada. Facebook has served him with the judgement and will be taking as much of his money as it can. It hopes this will have a deterrent effect on other individuals targeting its site. Given the difficulty of enforcing such laws around the world, its likely that spam will continue.

Guerbuez, in any case, is also banned from Facebook for life.

I finally found the best source out there for all the latest ringtines for my phone at http://www.spam THey dont sound bad like the ones from my actual phone company, these are 100 times better and they have thousands and thousands of ringers to choose from and when you use them the first time you get 20 free ringtones. Stop paying so much for your ringtones,don’t be a sucker, get them from my place, http://www.spam

remember i told you about those pills that mike and his brother have been taking that made their pricks larger then life? well i finally got more info on whats been happening. mike have been taking the pills now for 6 months from http://www.spam and his brother about 3 months now. yesterday i found out that you know who has been taking them for the longest time now too, that blew me away. so the secret is out, these enlarge pills really work and more people then i realized are taking them daily. i am thinking of getting some for a certain someone today, they guarentee them 100 percent that they will work or every cent you paid back to you. http://www.spam

hey, check this out! you know smoking bud? well there is this site http://www.spam that sells super potent legal bud, yes legal herbal bud for sale online, it doesn’t show up in drug tests or anything either, i started selling this stuff too and am making a killing, they ship it to you discreetly and it’s 100 percent money back guaranteed, this is the site http://www.spam it’s not illegal, but hurry up before they ban it in the states.