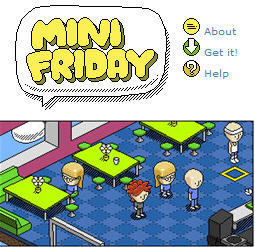 The makers of Habbo Hotel, the wildly popular virtual world game aimed at teenagers, have quietly released a mobile version called Mini Friday that is seeing steady growth: It’s about to hit a million registered users.

That’s a robust number, keeping in mind that the application requires download and registration, is restricted to users 18 or older, and runs only on select phones (Nokia S60 series). The company also hasn’t really talked about the product.

Habbo Hotel’s co-founders Sampo Karjalainen and Aapo Kyrola revealed more about the overall company’s momentum yesterday, during the “Slush” event here in Helsinki on entrepreneurship, where I moderated two panels. The company (child company of Sulake) finally became profitable this year with $50 million in revenue. Earlier this year, the flagship product, Habbo Hotel, registered its 100 millionth member, though only 10 million of those are active each month.

With its immense appeal and business model of virtual goods, I’d expected Habbo to be a little more profitable. But this is a large operation: It has offices in 15 countries and employs more than 300 people. It has raised $25 million in venture capital from Benchmark Capital, 3i Group and Finnish telecom company Elisa Group. And the company’s tale — it toiled for eight long years beginning with a team of just four people — was an inspiration to the audience here, where the gloom about the economic downturn is palpable.

The founders said they were initially skeptical that Habbo Hotel would work on mobile phones. However, the mobile testing version (beta), launched in 2006, has steadily gained users, with particular strength in Brunei and Indonesia. The company plans to take the product out of beta soon. See the video below for a demo of how it works. Users get to select the gender, height and clothing of their characters, and move them from room to room (in the mobile version, the rooms are frequently bars, and there’s more “mature” chat). Characters can talk with individuals in each bar, or “shout” to the whole group. You can dance. It also lets you choose which language you want to speak by referring you to rooms with people who speak that language.

Kyrola said the company is working on an iPhone version of the application. He said it has been a joy to work on the iPhone platform compared to the “horrible” experience of working on the Nokia/Symbian platform.

Yep, even here in Finland, on Nokia’s home turf, the brightest developers are dissing Nokia and turning to embrace Apple’s iPhone.