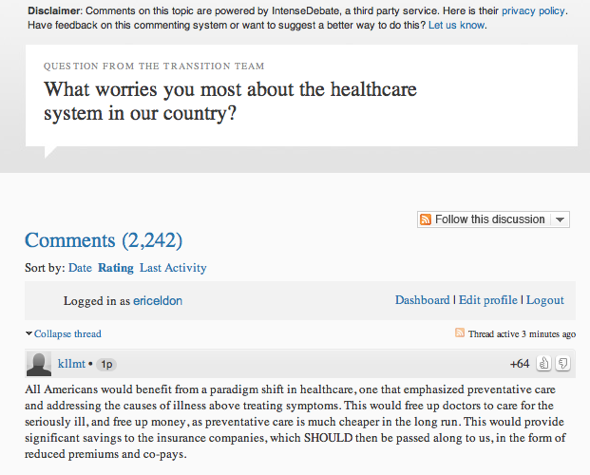 Change.gov, president-elect Barack Obama’s web site covering his administration’s transition to the White House, now lets users share their feedback about the U.S. health care system. Since this new page of the site launched yesterday, asking the provocative question “What worries you most about the health care system in our country?” it has garnered well over 2,000 comments.

This is a great early step in making government more open — a long-standing promise of Obama’s, and an ideal that I believe needs to be practically integrated into his administration from the get-go in order to be effective. It’s also a boost for the OpenID web-wide user identification initiative, but more on that below. The next step, of course, is how the administration will use the comments to actually implement policy. Obama doesn’t take office until January, so one step at a time. He used social networking to his advantage during his campaign, and after being elected has begun doing things like posting weekly address videos on YouTube.

Most commenters seem to be serious types, from the quick look I’ve had. But they can also be anonymous, so I’m surprised the comment trolls haven’t struck yet; quite likely, moderators are at work and already quite busy.

The other angle here is that the site is using comment plugin IntenseDebate, a service that provides a range of additional features like threads for related comments, voting on comments, and more. Intense Debate was recently purchased by blog platform company WordPress, which no doubt gave it added legitimacy when the administration chose which plugin to use. (VentureBeat, in a sharp break with the Obama administration’s policy on this major issue, uses comment plugin rival Disqus. See below.)

Meanwhile, IntenseDebate uses an open identification standard called OpenID, that aims to let users sign into any site using pre-existing identities on other sites. I was able to sign in to comment on Change.gov using my WordPress.com username through Intense Debate’s implementation of OpenID. The concept of OpenID has seemed a bit too abstract, in my opinion, for the average user to understand. But Change.gov is giving both IntenseDebate and OpenID a big publicity boost. And it’s also using OpenID more openly than the service’s other partner sites. As ReadWriteWeb’s Marshall Kirkpatrick notes:

Every other major player that has announced support for OpenID has in fact only allowed accounts with their company to be used as an OpenID elsewhere — they have not allowed other OpenIDs to be used to log in to their own sites. That means Barack Obama is cooler than AOL, MySpace, Google (except for Blogger.com comments) and Yahoo!. Maybe you already knew that, though.