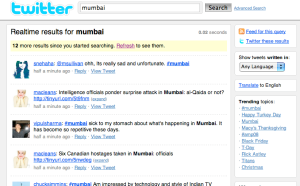 It’s one thing when a couple dozen or so tech blogs rally around the idea that Twitter is an excellent source for the quick dissemination of news in a time of crisis — many of us have been trumpeting this fact for months if not longer — but it’s another when CNN (and not one of CNN’s blogs, but CNN proper) says the same thing.

One of the top headlines today on CNN.com is titled “Tweeting the terror: How social media reacted to Mumbai.” The opening sentence of the piece is even more to the point: “It was the day social media appeared to come of age and signaled itself as a news gathering force to be reckoned with.”

While CNN and other mainstream publications have been slow to credit online services like Twitter in the past for breaking news during times of crisis, like earthquakes and wildfires, they’re definitely coming around. It shouldn’t really be a surprise that CNN is the one saying this either. One of their anchors, Rick Sanchez, has been very active in the Twitter community, using the micro-messaging service to help with his reporting for several months now.

But CNN isn’t quite as rosy about Twitter’s “reporting” capabilities as Ingram — after all, they don’t want it taking their jobs. Noting the widespread rumors and inaccuracies that began to pop up on Twitter about the attacks alongside true reports, CNN warns that “while Twitter remains a useful tool for mobilizing efforts and gaining eyewitness accounts during a disaster, the sourcing of most of the news cannot be trusted.”

That, of course is true, but as Ingram notes, when some wrong information started appearing on Twitter about the attacks, other users were quick to correct the reports — and again, those corrections probably happened quicker than they would have at traditional media outlets.

It’s really a question of speed versus 100 percent accuracy. In many cases, you have to take one over the other. In a time of crisis, I would guess that just about everyone would choose speed. And in that regard, organizations like CNN simply cannot match a service like Twitter, which has millions of potential “reporters.”

The old adage, “don’t believe everything you read,” is still important to keep in mind when getting information from Twitter. But it’s precisely an “old adage” because it’s been around long before Twitter ever existed and will be around after it’s gone. Twitter is just another source, granted a very fast one, but it still requires the ultimate filter: Your brain.