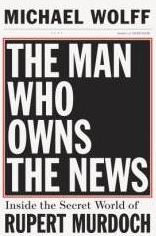 MySpace is no longer “the flavor of the month” among social networks because it’s too low-brow for the aspirational American populace, according to journalist Michael Wolff. He’s in a better position to know what News Corp is thinking than most: He published an extensive biography today about News Corp mogul Rupert Murdoch called “The Man Who Owns The News.”

Wolff goes into more detail about this classist idea in an interview with BusinessWeek’s Jon Fine, excerpted below,

But before I get into that, I think Facebook’s success is more nuanced than either Wolff — or Fine — imagine. People want to use the web to share information about things they care about, especially (for whatever reason) wealthier, better-educated people. Facebook does a better job of helping them do this.

Michael Wolff: MySpace. They [News Corp] know they have a huge problem. They’re quaking in their boots about MySpace. It always was a little rustling when I was there, there was this rustling—

Jon Fine: What do you identify as the problem?

JF: OK. But Facebook is still smaller in America, and—

MW: Absolutely. But you know the rhythms of the Internet business, which I think are still, at this point, immutable. Something else comes along — a better technology, a better flavor of the month — and you, the former, are downgraded. Possibly to the point of being downgraded out of existence.

JF: I think there you are falling into a fairly common thing. Facebook — it’s a better experience than MySpace. [ed. my bolding] But the traffic on MySpace and the people on it…

MW: All of the growth now in MySpace is international.

JF: Sure. Because once you get to 75 million in the US, where are you gonna go?

MW: I know they recognize this: “We got to monetize this thing. We got to get this thing off the books” 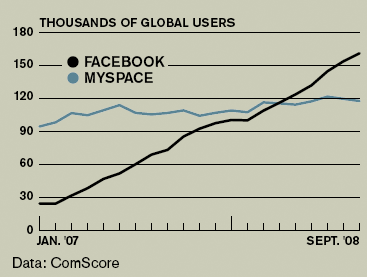 To which I’d add: Facebook continues to grow in the U.S. — but especially around the world — while MySpace barely ekes out growth anywhere. MySpace supposedly had 118 million monthly active users worldwide in September, while Facebook had 161 million, according to third-party analytics firm comScore. (Note: The firm’s numbers are typically far higher than what the social networks themselves report due differences in measurement methods, although the proportionate size of each site’s traffic is likely accurate.)

Wolff attributes MySpace’s problem to class. Fine has already hit on a big reason why Facebook is winning, bolded above. Yet when Wolff compares MySpace to AOL, Fine says no, MySpace matters more because its users are more tightly woven based on their friend connections. Wolff says this isn’t enough.

JF: AOL was monodimensional in a way that MySpace is not. I don’t think that’s particularly debatable.

JF: [unsuccessfully stifling laughter] I don’t mean to get all Murdoch’s-kids on you [an obscure reference to an earlier part of the conversation], but if you are in a band, you are on MySpace. You have to be on MySpace. That’s a powerful driver. And second of all — if I am to accept your reasoning, even though I don’t — as the success of [News Corp’s British tabloid] The Sun will tell you, there are lot of cretins out there, and you can make a lot of money off cretins. By appealing to their essential–

MW: No! That is the difference. And that is one of the interesting points of Murdoch. He wants to make money off of what he rightly saw as a rising lower class. He came to this country and he sees, that’s just not really true. No one really identifies with being lower class [in the U.S.]. As soon as it comes to you — ‘I am lower class’ — you run, and you have to rehabilitate all of your aspirational identifiers.

Wolff and Fine only have pieces of the answer, in my view. Facebook has made a point of targeting real-world communities since it started on college campuses in 2004. It convinced people to add their real information: their name, location, real friends, etc., while MySpace focused more on self-expression, which often amounts to fake profiles, fake information and fake friendships. Facebook has since focused on encouraging communication between users, through things like the news feeds about friends’ activities that it introduced in 2006. MySpace has been playing catch-up across the board. For example, it only introduced a similar “feed” feature in 2008. Facebook, meanwhile, redesigned its entire site this summer to orient users around feeds. That’s essentially what I think Fine meant when he said “it’s a better experience than MySpace.”

And that’s where I disagree with both Wolff and Fine. Facebook’s success isn’t just about class, it’s about why and how people use the site, regardless. The correlation with class, though, is seemingly that wealthier, better educated types are drawn to sharing information rather than self-expression. And that is why micro-messaging service Twitter may be doing so well with typically well-off, well-educated, early tech adopters. It is even more efficient at sharing information than Facebook. This is why Facebook wanted to buy Twitter.