Facebook has spent months looking for a partner to take over an in-house classifieds application it launched in May of 2007, called Marketplace. The app hasn’t gained significant traction in the last year and a half. Now, Facebook has found a partner: Classified listing service Oodle.

San Mateo, Calif.-based Oodle claims to aggregate classified listings from more than 80,000 other web sites. It distributes those listings across any partner site that uses its service, including The Washington Post and other mainstream media outlets. It claims to get more than four million users a month.

It’s still not clear how Oodle might integrate classified listings from Marketplace with its service. But one can imagine seeing web-wide listings in an Oodle-owned Marketplace, as well as Facebook listings on Oodle’s other sites. The new Marketplace application will launch in the first quarter of next year.

This is quite an ending for Marketplace, considering that Facebook launched it only days after Oodle built its own service to integrate with Facebook data. At the time, I expected Marketplace to make roadkill of Oodle and other third-party classifieds competitors who were trying to use the early version of Facebook’s platform. (Note: This all happened a couple weeks before Facebook launched the full-blown version of its developer platform.)

In hindsight, both Marketplace and Oodle’s services at the time were more experimental than anything. Marketplace tried to take advantage of your friend connections on Facebook to help you find items for sale, housing and other types of listings. Facebook even gave it special advantages over third parties — it came pre-installed for every user, for example.

Aside: Facebook has previously told me that the third-party classifieds service provider who takes over Marketplace won’t receive any special benefits.

For whatever reason, neither Marketplace nor third-party classified applications have taken off on Facebook’s platform. Apparently, people were already happy using established classified sites like Craigslist, so Facebook decided to unload Marketplace to focus on more central features of the company.

Oodle, meanwhile, has continued trying to build a service that spans sites across the web. It also inked a deal with MySpace, Facebook’s archrival, this summer, to serve its classified listings on that site. It has previously raised $16 million from JAFCO Ventures, Greylock Partners and Redpoint Ventures.

Perhaps Oodle’s web-wide network can help it succeed on Facebook. 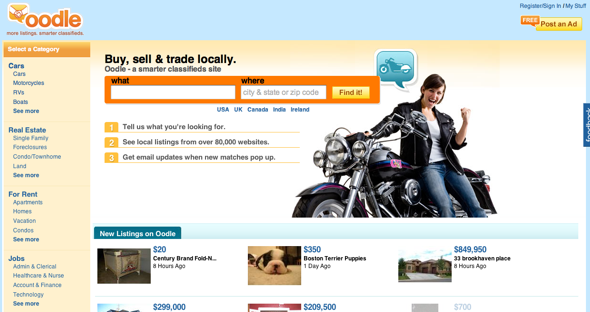