In the past few years, Bunchball has figured out how to get consumers more engaged in web sites by making them as addictive as video games. Now it has recruited a former Yahoo executive to move on its game plan.

Peter Daboll, former chief of insights at Yahoo, has joined Bunchball as chief executive, becoming part of the official brain drain at the search giant. Rajat Paharia, founder of Bunchball, will stay aboard as chief product officer. The Redwood City, Calif.-based company has created its Nitro platform, which big web site operators can adopt to increase consumer loyalty. 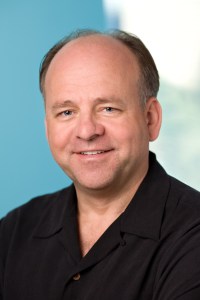 Nitro sets up a system that rewards consumers with points for leaving comments, helping fellow users, inviting friends to join, or submitting their own content like user-generated videos.

Much like in a video game, users can earn points to climb levels, dominate a leaderboard and compete with their friends. They can then redeem the rewards for whatever they choose. The payoff for companies: the rewards that the Nitro-based systems give out — prestige for a user in the form of a digital trophy, for instance — are a lot less expensive than the traditional marketing campaigns that users have begun to ignore.

With this enterprise-focused business, Bunchball is one of the companies that embodies the term Funware, or using video game mechanics to make non-game applications more exciting.

Paharia and Daboll said in a conference call that its strategy is going well. The company has four major announced clients: NBC.com, Hearst Corp., Comcast, and Sports Illustrated’s Takkle site. Considering that the company has been around since February, 2005, that isn’t many customers. But Paharia acknowledged that it took a long time for Bunchball to fashion Nitro the right way.

When Bunchball first started, it created a bunch of games to do just that. But it pulled back from games and focused on its meta-game, or the rewards platform that other companies can adopt. The reward system influences consumer behavior and also documents it for the site’s owners to analyze. Companies pay Bunchball by subscribing to its platform service. In return, the company can increase the amount of time that users spend on a site anywhere from 55 percent to 100 percent.

Big companies are aware that it is more important to get users to come back often than to get them to visit the site just once. So they’re already predisposed to understand Bunchball’s pitch. The hard part, Paharia said, is to convince them that Bunchball can do a better job of making a site more engaging.

“Our real competitors are the people who decide to do this internally,” Paharia said.

There are rivals out there who embrace the idea of using game-like behavior on non-game applications. One example is Lithium Technologies, which enables companies such as Dell to engage consumers more deeply by staging community forums that keep people talking. Other kindred spirits include Shufflebrain, rmbr, Fyreball, Yahoo’s Flickr, the Google Image Labeler, and Seriosity.

Bunchball sets up systems where consumers are rewarded instantly and frequently. It takes about two to five weeks to implement the Nitro platform as a customer; in each case, it is custom-tuned to the content the site owner already has.

Paharia said he decided to step back so that Daboll could aggressively grow the business. More unannounced customers have signed on, including a video game publisher. Paharia said that latter client proves Bunchball’s strategy, since the game publisher clearly had the talent to make its site more game-like yet chose to outsource the work instead.

Paharia said that, while he helped develop the strategy and platform, he decided that he didn’t have the skills to turn Bunchball into a much bigger company. Right now, it has just 10 employees. 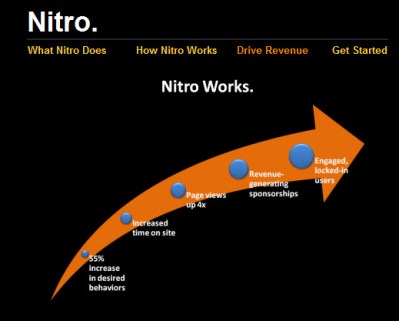 Paharia said that the company looked at executives in a wide variety of industries, from video games to media. Paharia said he believed that Daboll would bring insights into the kinds of companies that Bunchball wants to target as customers.

Bunchball has raised $6 million in funding from Granite Ventures and Adobe. Daboll said the company did not have an immediate need to raise money.