Social network MySpace is launching a new worldwide service that will let its users watch videos on its mobile site from their phones. Mobile video has not been a smashing consumer success. But MySpace’s mobile site (m.myspace.com) gets more than 10 million monthly unique visitors and more than 3 billion monthly pageviews, the company says. So the introduction of video could give mobile-video streaming a big boost.

MySpace users will be able to watch any video they’ve uploaded to the web site or marked as a favorite within the Myspace video player. They’ll also have access to branded video channels offered by well-known companies like TMZ, National Hockey League, National Geographic, The Onion and College Humor. This content creates new opportunities for MySpace and its partners to make money from mobile advertising.

RipCode, a mobile video infrastructure company, is partnering with MySpace on the deal. Its technology lets users access videos from a range of phones with different types of video-playing systems. However, it doesn’t work on the iPhone.

Of course, user access to videos will also depend on data plans. Mobile carriers around the world typically offer plans that charge more for high data usage, necessary for video. If MySpace’s mobile video feature is a hit, it could make carriers more money by pushing more expensive data plans. And, of course, users should check their plans before watching.

A boost for mobile video?

Mobile video has been available for several years, mainly through applications that come pre-installed on phones per agreements with carriers. But its adoption has lagged. Startups that offer variations of online streaming video services include MyWaves, and live-streaming sites Qik and Kyte. YouTube also has a mobile site.

More than 100 million U.S. consumers have phones capable of playing video, or around 42 percent of all U.S. mobile subscribers, according to a recent report by research firm Nielsen. But only 10.3 million mobile users watched video on their phones in the third quarter of this year. That’s up from 9 million the previous quarter; so there’s some growth, driven by a range of new video-playing devices. The average mobile video viewer watches videos 17 times a month, spending about 15 minutes watching per session.

MySpace is popular with teenagers, an audience that spends an inordinate amount of time watching mobile videos compared to other groups. Some additional statistics to highlight that point:

— 65 percent of mobile video viewers are under age 35, compared to 35 percent of total mobile subscribers.

— Over half of teens (54 percent) report watching video on their cell phones in bed. That’s 1.5 times more likely than average viewers.

— 64 percent of teens report watching programs to completion, the highest portion of any age group.

— Teens are watching an average of 11.7 channels a month on their cell phones.

In terms of devices, Apple’s iPhone is unsurprisingly the top device for video watching in the U.S., in part because it comes with an application pre-installed for watching YouTube videos. Nine percent of mobile viewers use the iPhone. But MySpace won’t gain traction there until it works out a deal with Apple.

A boost for mobile advertising?

Besides making money for carriers, mobile video could infuse mobile advertising. MySpace told us back in May that mobile advertising has “grown in the last six months to be a real business” — the company aims to bring advertisers on its web site to its mobile offerings. It has since told us that it intends to keep its mobile content free and ad-supported to attract more traffic and more advertisers. 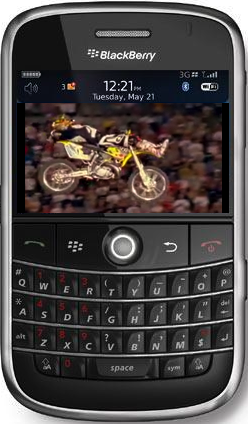 MySpace, part of News Corp.’s Fox Interactive Media division, has a dedicated sales team to sell sponsorships and cost-per-impression ads for both web and mobile in several countries. Advertising clients include Ford, Saturn, Warner Brothers, Toyota, Disney, McDonald’s and P&G. It also works with reputable third-party mobile ad networks including Millennial Media, Quattro Wireless and AdMob. Advertising campaigns include ways to get users to register their emails and phone numbers with a company, click to call a company for more information, find a nearby store or deal, get a coupon to use at a physical location, content downloads, and more.

Take a look at our in-depth article about the opportunities in mobile advertising — in spite of the recession, and advertising cuts — for more details on where the overall market is headed.

Also, MySpace Music, the social network’s new streaming music site, doesn’t yet include mobile integration. The obvious guess as to why would be that its partners — music labels — don’t want to let people stream playlists of their favorite songs onto their phones from the site. Let’s hope MySpace can resolve that question, because mobile streaming music is a killer feature. Internet radio station Pandora, for example, is the most popular free application on the iPhone. MySpace Music is a way for labels and musicians to make money from selling digital tracks, concert tickets and much more. Doing it right could make everyone a lot of money, and make users very happy. As of now, though, music rights issues have not been resolved. But MySpace knows that music is part of its longer-term mobile strategy.

Update: MySpace sent us a link to a how-to video on the service: http://vids.myspace.com/index.cfm?fuseaction=vids.individual&VideoID=47525015