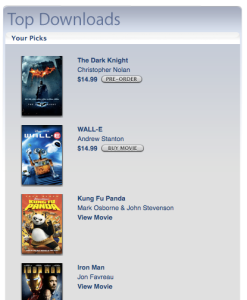 Apple launched a new “iTunes 2008” section of the iTunes store tonight, showcasing its top content for the year. The best-selling movies category is particularly interesting because at the top of the list is a movie that isn’t available yet: The Dark Knight.

Set to be released next Tuesday, The Dark Knight apparently managed to outsell every other movie that iTunes has offered this year in pre-sales alone. That includes hits like Iron Man, Superbad and Wall-E. Perhaps we shouldn’t be too surprised. After all, The Dark Knight is the number two movie of all time at the box office with over $530 million made domestically alone.

Or maybe, The Dark Knight will be the movie that pushes the iTunes movie store into mainstream usage like its music store sibling. After all, between new Macs, Apple TVs, iPhones and iPod touches, you can bet that there are going to be a lot of new devices capable of playing iTunes movies this holiday season (and of course, Windows-based PCs can play this content as well through iTunes).

As The Joker might say, “it’s all part of the plan.“