Save the drama for your mama, or at least take it online. Circle of Moms, a new parenting website launched in October 2008, can now celebrate its 850,000 registered users. Only two months after crashing the parenthood site party, it’s now the second largest community of mothers after CafeMom with its public launch today.

Circle of Moms is a community where mothers befriend each other, keep friends and family updated on their kids’ lives, and join special-interest groups to answer questions and provide support. These smaller communities are focused around topics like twins, special needs children and parenting tips such as saving money and recipe swapping. There’s even a group that’s dubbed itself “Obama Mamas.” 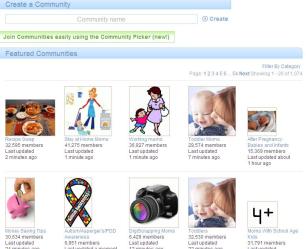 Some of the largest groups, such as stay-at-home moms, boast tens of thousands of members and hundreds of posts. There’s a bustling product review section integrated with Amazon that allows moms to make gift recommendations based on the ages of children. Users can even give their friends’ children virtual gifts (still not as good as the real thing, though).

What’s unique about Circle of Moms is that it grew its user base by combining the power of its web site along with a Facebook application, which currently has over 839,000 monthly active users. The sites reinforce one other since moms are encouraged to interact on both and rally their friends to join, but we’re not sure how many of the Facebook app users also visit the home site. I wonder, though, if Facebook will monitor the application for content involving breast-feeding mothers, since those types of photos have been banned from the site. It makes sense that the site wants to integrate with other platforms in the future so that another mom is only a click away.

The site’s first brand sponsorship will be launching next week, to be followed by more brand advertising. Who will it be? Fisher-Price? Pampers? It also plans to make money from affiliate revenue from gift recommendations in the short run, and offer premium services later on.

Circle of Moms has raised funding from angel investors, including Mike Maples of Maple Investments, Jeff Clavier of SoftTechVC and Naval Ravikant of HitForge.