iPhone game-development house ngmoco is on a roll. Its first game, MazeFinger, was good (at least for a free app). Its next game, Topple, was great. And today it released its third game, Dr. Awesome, Microsurgeon M.D., and it’s — wait for it — awesome.

The premise of Dr. Awesome will be familiar to anyone who has played games like Trauma Center on the Nintendo Wii or DS systems. You’re a doctor, there’s an emergency, and you must do surgery to save a patient’s life. If that doesn’t sound fun at all, you really have to play it.

You control the in-game surgeries with the iPhone’s (or iPod touch’s) accelerometer. You simply tilt the device to determine where you’re going to cut and hopefully isolate a virus before time runs out.

But there’s another kind of fun, and kind of meaningless element to the game: It uses your iPhone’s contact list to populate a patient list. It doesn’t actually do anything like contact your friends or change your information, but it will use their names. It keeps a running tally of which friends you’ve saved and which “expired” under your care. You can email these results out to friends as well (which also works to virally spread the game — smart).

There’s definitely a trend in ngmoco games: The first one was free, the second was $0.99 and this one is $1.99. When Rolando, another ngmoco game that I’m definitely looking forward to, hits later this month, it will raise the stakes all the way up to $9.99. But as representatives from ngmoco told me a few weeks ago, there will always be the so-called “micro-priced” (cheap) games alongside the more robust games at the higher prices.

If they’re anything like Dr. Awesome. Bring them on. 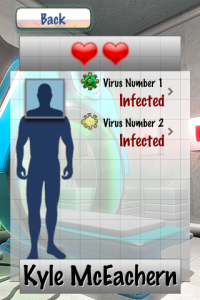 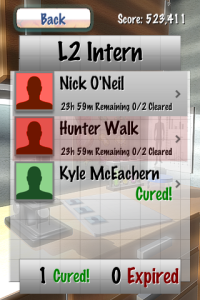