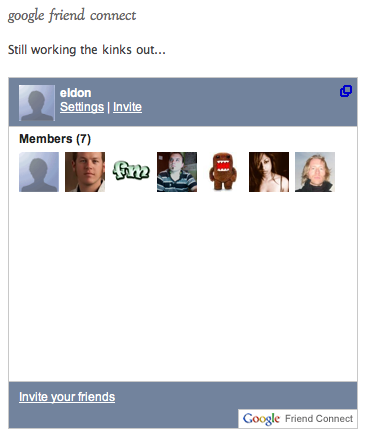 Up to this point, Google’s Friend Connect service seemed to lack two essential ingredients. Sure, it offers an easy way for web publishers to let users provide their identities on other sites. But Friend Connect has neither a popular social network to provide user relationships on other sites, nor a home social network to drive user interactions across sites, as I covered last night.

Contrast that with Facebook’s rival service, Connect, which offers ways to find Facebook friends on sites that use Connect, and ways to share information from those sites with friends on Facebook.

But that’s fine, says Google’s Joe Kraus, because Friend Connect helps strangers get to know each other across the web. Kraus has been helping to lead Google’s social networking initiatives, including Friend Connect.

“I’m a Formula 1 fanatic,” he tells me. “When I go to a Formula 1 site, I can connect with people I don’t know [using Friend Connect] but who I’d want to talk to about Formula 1.” Friends on social networks, he says, may want to share information with Kraus about other things, but not hear about his race car obsession.

It’s a legitimate example, for sure, as many people have multiple identities on diverse web sites — identities they don’t want to intermingle. The question is whether this use case is as significant as what Facebook offers. People probably do care what reviews their friends leave about businesses on local review site Citysearch, a Connect partner. (Will they even care about ‘connect’ functionality in the first place? That’s another question entirely.)

In some sense, Friend Connect is more like MyBlogLog, a distributed social network of sorts that Yahoo bought a year ago. Note: Yahoo is also busy working more advanced social features for MyBlogLog, according to MyBlogLog cofounder Todd Sampson.

Friend Connect was originally conceived to be more like Facebook Connect, in terms of plugging social network friend relationships and interactions into sites across the web. The “like-minded stranger” use case that Kraus describes emerged as the company began testing out Friend Connect with partners, earlier this year.

All of these rival “connect” products are still under heavy development. “There’s no question that where we want Friend Connect to go is to integrate more and richer social graphs,” says Kraus. The “social graph” is a popular industry term used to describe the network of information about relationships between users, contained within social networks and other social software.

What could this mean? Friend Connect already lets you sign in using your Google, Yahoo, AOL or OpenID identity. For the time being, you can only access information about your social graph based on your friends in Google Talk (which many people use through its integration with Gmail), through Google-owned social network Orkut, and social web aggregator Plaxo.

Friend Connect will likely try to integrate more social data from partners who use the OpenSocial social network application standard. It already uses OpenSocial-based software code, so expect future developments to dovetail the two efforts. OpenSocial is in use at MySpace, hi5 and basically every other social network — except for Facebook — including less directly social sites, such as business networking site LinkedIn. One can imagine all sorts of social networks essentially syndicating their users’ identities across the web through Friend Connect, and letting the thousands of developers who build applications for OpenSocial-using networks to do the same.

The problem is in convincing other networks to do so.

MySpace has its own competing service, separate from Friend Connect, called the Data Availability Initiative. Facebook — which Google originally tried to tap into through Facebook’s platform — still won’t give Google access. I asked Krauss if Google had talked to Facebook about that recently.