The Consumer Electronics Association has shaved its forecast for fourth-quarter sales of consumer electronics to account for the the impact of the falling economy.

The U.S. consumer electronics wholesale market is now expected to grow 0.1 percent over the quarter, thanks to steep discounts and poor consumer demand. In October, the group predicted growth of 3.5 percent.

The change throws some cold water on the rosy sales reports of the past week. Indeed, shoppers may have trampled a Wal-Mart employee to death on Black Friday, but not because they wanted to get big-screen TVs. 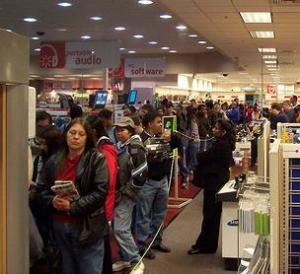 For a time, it seemed like consumers might rally. Black Friday sales were stronger than expected across retail, and Cyber Monday sales were also up, according to various surveys. The CEA has 2,200 member companies and it sponsors the massive Consumer Electronics Show in Las Vegas in January.

Consumers are paying less for flat panel TVs. Unit shipments are up 22 percent, but revenues are down 3 percent. Mobile phones, computers and other tech goods are also selling at big discounts. The CEA said the drop off has been severe and rapid since late October.

I made it into a Best Buy store in Los Angeles, shopping with relatives looking at an LCD TV. I bought a Nikon P80 camera for $300. But the relatives decided to put their purchase off until after the Super Bowl, mainly because they expected prices for TVs to keep falling. Normally, you’d expect digital TVs to be flying out the door because of the changeover from analog to digital TV coming on Feb. 17. But Multimedia Intelligence predicted this week that revenue from LCD TV sales will drop in 2009.

Computers are now expected to fall 2 percent in revenue compared to a year ago, while mobile phones are expected to rise by only 5 percent. Previously, the CEA expected sales of cell phones to grow 11 percent in the quarter.

Of course analysts are expecting Apple to do well. But, in contrast to piles of inventory for other goods, there appears to be a shortage of iPods, perhaps due to overly cautious planning by Apple.

The bright spot: video games, which are still expected to grow 5.6 percent in the fourth quarter. We’ve tracked that market closely, noting how Nintendo Wii consoles are still hot items.