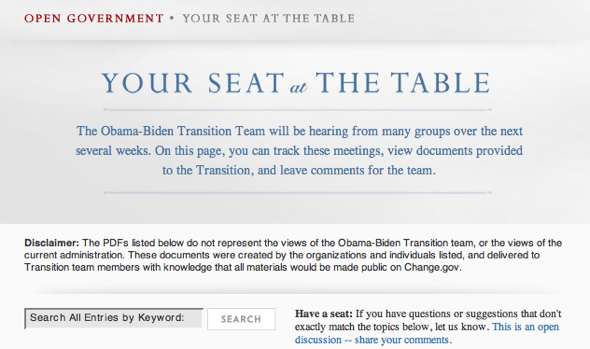 Governments are eternally pressured by various outside groups who believe their causes deserve special political treatment. In an effort to show who’s trying to get what from president-elect Barack Obama’s incoming administration, his transition site, Change.gov, is publishing documents received from groups like the American Civil Liberties Union, Business Roundtable, National Council of La Raza Institute for Hispanic Health and many more. The documents, available for download in PDF format, show groups making arguments for various policies they believe the administration should be pursuing.

The new section of the site, called “Your Seat at the Table,” also offers a feature to let people comment on each group’s document. It’s another early effort by the incoming administration to try to make government more transparent. From now on, “all policy documents from official meetings with outside organizations will be publicly available for review and discussion on Change.gov,” the administration says.

The documents, of course, are just the tip of the iceberg in terms of outside interests trying to direct — and often successfully directing — the efforts of the federal government. Each group featured on this new section knew that the document was going to published on the site ahead of time. I would be much more intrigued by this section if the government were to start publishing documents that special-interest groups didn’t know were going to be published. Or even better, if the section included how much each of these groups and affiliated businesses and organizations gave to each state and national elected representative.

Talking face-to-face with advocates and experts is a vital part of the Transition. But in past transitions, meetings like these took place behind closed doors and lacked the public input and transparency we’re working hard to provide.

So this is an early effort in showing special interest activity at work. More substantive changes will require much more across-the-board discomfort on the parts of groups and politicians. For the time being, I’ll continue expecting the Fourth Estate to play the role of government and special-interest watchdog.