MySpace’ web-wide identity service is announcing that it will get some new features soon. This is the latest attack in a two-and-a-half-sided battle the company is fighting with rival Facebook and frenemy Google.

MySpace hopes its service will eventually make it a central social hub for the web, by letting users sign into other web sites using their MySpace identities. Starting soon, it will let MySpace users on those sites send information about their activities back to friends on MySpace’s home site. The company is also introducing a way to sync your MySpace account with Google’s just-launched Friend Connect service.

Thankfully, MySpace is also changing the service’s wordy name, the “Data Availability Initiative,” to the more elegant “MySpaceID.” I’m still worried the overall concepts are going to be confusing to the average social network users; MySpace’s announcements today are intended to help clarify what it’s offering. 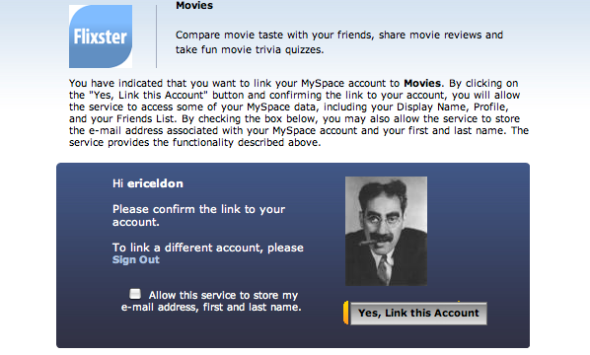 So far, it has just offered a way for developers to access basic MySpace information like user profiles, interests and friend lists.

The sharing-to-MySpace feature isn’t live yet, but it sounds promising. After a user signs in to another site using only the public URL of their MySpace profile, they can opt to send information back to MySpace.com — information that will appear in a section of friends’ MySpace profiles, called “Friend Updates.” This section has, until now, just shown friends’ activity on the site. MySpace hopes it will create a two-way flow of traffic between users on MySpace and users on sites that implement MySpaceID. If this concept sounds familiar, the reason is that it’s the same concept as Facebook’s “Connect” service. That service became publicly available last week. (Both were originally announced within days of each other last May, so it’s not clear who is copying who.)

Partners include mobile carrier Vodafone, web start page company NetVibes, and existing partners like web portal AOL, social web browser Flock, movie fan site Flixster (pictured above) and event site Eventful. Imagine, for example, a user on Flixster leaving a comment about their favorite movie, then having a link to that comment show up on their friends’ MySpace profile pages.

Are MySpace and Google friends?

There’s a separate piece of news here, having to do with Google. MySpace says it also plans to integrate its user identities with Google’s Friend Connect service. Friend Connect itself is a sort of rival to MySpaceID and Connect that also launched last week. It lets a web site owner install a simple widget on their own web site that contains social network-style user profiles.

This allows a user to sign in using existing identities on Google, Yahoo, AOL and OpenID (a service that itself lets you sign on to web sites using other identities). The news is that MySpaceID will be a fifth sign-in option here, at some point — the company isn’t specifying a time-frame for the feature’s implementation.

Friend Connect, unlike Facebook Connect and MySpaceID, doesn’t rely on a home social network to drive two way interaction. Instead, you can import a set of friend connections from other sites. Right now, networks you can get friend relationship data from include Google Talk, Orkut (a Google-owned social network), or social web aggregator service Plaxo — but not MySpace. Friend Connect touts itself as being a way to meet like-minded strangers on other sites, not a central social hub.

[Update: To be clear, Friend Connect allows interaction with friends across sites. As Kevin Marks, a Google engineer, points out in comments below: “As new friends are added on the networks you connect, they will show up as friends on sites that use Friend Connect too. Friend Connect lets you login with one ID, and connect to other social sites to see friends and to post activities back to them – you can have more than one ‘home’ social network.”]

Eventually, though, MySpace could use Friend Connect to share information back to MySpace’s home site — assuming, I suppose, that users sign into Friend Connect using their MySpace accounts and not the other accounts.

MySpace and Google are using a variety of technologies that are more broadly trying to make data available across sites. One, as mentioned, is OpenID. Another is OAuth, a standard that allows a web site to identify a user and share data with them, without fully exposing the users’ identity. For example, once a developer has opened an account with MySpace, they can get a software “token” that allows them to access user data on MySpace, like profile pictures and lists of friends, provided they have signed in to the site using their MySpace identity. MySpace and Google are also leaders in promoting the OpenSocial standard; third-party developers can build applications that operate across any social network or site that uses OpenSocial. Both companies could use their respective sign-in services to allow OpenSocial app developers access to users on other sites around the web.

Both companies won’t say it directly, but they’re trying to contrast themselves with Facebook’s proprietary software for Connect. Given that Google doesn’t really have a lot of social network data in the first place, and that MySpace isn’t giving developers free access to its data, the main benefit of using this “open” software is that developers may be more familiar with how to use it.

Conclusion: This is all interesting but unproven

Since all of these efforts are so new, there’s not much data showing how much users actually use them. Facebook vaguely says it is seeing good results from Connect’s months-long beta testing. That’s about it for evidence. Conceptually, however, I’m excited by the idea of being able to sign in and take an action on another site then share it with my friends on a social network. At some point here, VentureBeat will be integrating with one or both of these services. I’m a little more skeptical about Friend Connect, because it isn’t driven by a central social networking hub. I’m not sure the average user will understand the concept of signing into it through a third party service, in order to have friendships with strangers on random sites. I’m looking forward to be proven wrong.

In sum, the idea of having a single identity that spans the web sounds great. Getting anything to work, as the above services show, is quite another matter.