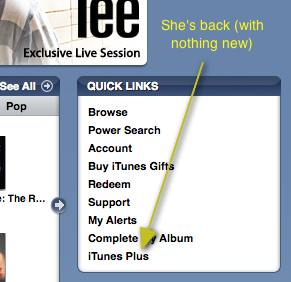 Rumors are swirling that Apple could launch a fully DRM-free iTunes as soon as tomorrow. Unfortunately, that doesn’t appear to be the case — yet.

This latest rumor, started by French technology site ElectronLibre and recirculated by AppleInsider, claims that Dec. 9, tomorrow, is the day that Apple will finally offer DRM-free tracks from Sony, Universal and Warner to round out its major music studio offerings. Currently, iTunes has EMI as the only major label supplying DRM-free tracks (which it called “iTunes Plus”) in the store.

Unfortunately, the report is very vague and doesn’t even quote specific sources. This led CNET’s Greg Sandoval to do some homework, and his music-industry sources claim that a launch is not imminent.

Sure enough, I’m looking at iTunes right now (it’s technically Dec. 9 on the east coast in the U.S.), and there don’t appear to be any new iTunes Plus tracks in the store. Apple has updated iTunes for the night, as you can see new music and movies that are coming out today like The Dark Knight.

But there are some other odd things going on — indicating to me that changes are coming — just not yet. First of all, the link for “iTunes Plus,” which resides on the right-side upper column of the main iTunes page, is back. We noted that this link disappeared a couple weeks ago without any indication as to why. This, along with reports of random previously protected tracks showing up on iTunes DRM-free, made it seem like that a change was forthcoming.

But now it’s back without any new tracks or information. It seems to me that Apple is clearly working on this area, but it doesn’t appear to be set for a new launch right now. Perhaps, when Apple finally does unveil the new studios’ DRM-free music, the whole of iTunes will be an iTunes Plus store.

And I say “when” because it’s pretty clear the change is coming. It’s just a matter of Apple and the labels finalizing the details. We know they’ve been talking for months, and evidently quite seriously for several weeks.

MacWorld, the major event in San Francisco every January where Apple typically unveils exciting new things is right around the corner. If I were a betting man, I’d put my chips on some kind of major DRM-free announcement there next month.