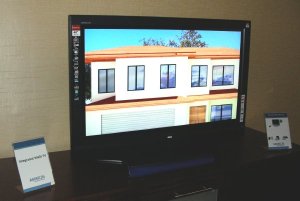 Israeli chip maker Amimon is announcing today it has sold more than 100,000 chip sets that let set-top boxes and other devices transfer data to a TV set without wires.

The company says it has generated millions of dollars in sales in 2008. That’s no small accomplishment, considering the existence of competing technologies and considerable consumer confusion about the best way to send video over a wireless network in the home.

Herzlia, Israel-based Amimon uses the 5-gigahertz band of wireless spectrum to send data throughout the home as far as 30 meters and at a rate of 1.5 gigabits per second (using a 20 megahertz data channel; twice that if you are using a 40 megahertz channel). That speed is just as fast as some HDMI (high definition multimedia interface) cables.

The technology accommodates data loss due to interference and other problems, mainly by intelligently dealing with errors in data transfer, said Noam Geri, vice president of marketing and business development at Amimon. The technology deliberately ignores any visual errors that is imperceptible to the human eye, Geri said.

There are plenty of rivals. SiBEAM has its own consortium of companies supporting its 60-gigahertz technology which can transfer data at 4 gigabits a second, without losses. But while SiBEAM has a lot of funding and support from Panasonic and Samsung, it isn’t shipping yet.

Amimon’s advantage is that it began shipping early. It is also faster and has longer range than ultra wideband, or WiMedia, which is being promoted by companies such as Alereon, Wisair, TZero Technologies, and Staccato Communications. WiMedia can transmit as much as 10 meters, but at its fastest it can transfer data at a range of six feet or so. Intel recently stopped a WiMedia internal chip design project and WiQuest, another WiMedia supporter, recently shut down.

Amimon’s chip sets are built into TVs and other products in the U.S., Europe and Japan. Customers include Sony, Sharp and Mitsubishi, while products from Belkin and Sanyo are coming soon. Since July, the company has been pulling together a consortium of supporters behind an open standard, dubbed WHDI. Members include Sony, Sharp, Samsung, Hitachi and Motorola.

The chip sets themselves aren’t cheap at about $60, but Geri said that is expected to come down as volumes rise. The company was founded in 2004 and has 75 employees. It has raised three rounds of funding and tens of millions of dollars to date. Investors include Argonaut Private Equity, Cedar Fund, Evergreen, Motorola Ventures, STATA Venture Partners, Walden Isreal.