Google announced today that its Book Search engine is now home to magazine archives. Partnerships with publishers such as Hearst mean you can read magazine articles in full-color, from page-to-page, in their original context. And you don’t have to be afraid of papercuts.

Searches now bring up results from magazines like Popular Science, New York Magazine and Ebony, plus niche publications such as Vegetarian Times and the admittedly obscure Bulletin of Atomic Scientists. Oddly enough, some big names such as Newsweek and Time are not yet available, but hopefully Google will expand its offerings soon. 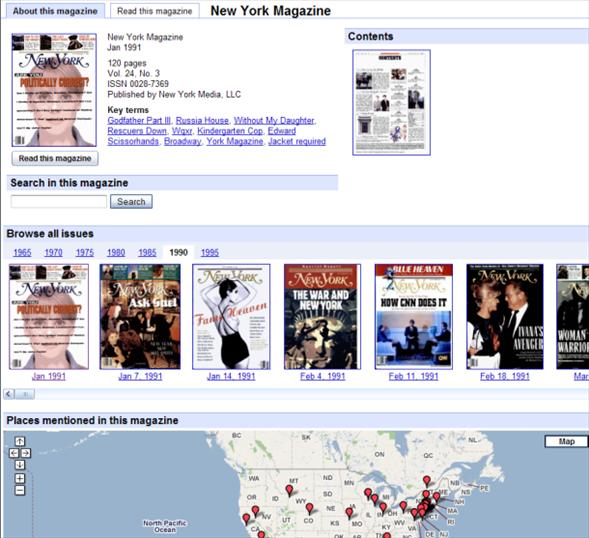 You can browse issues through the decades, in an experience similar to Google’s digital newspaper archives. Use the advanced book search options to restrict search results to only magazines. These magazine search results will eventually be integrated into Google.com search results, which may lead to serendipitous discoveries such as this piece on canine eyewear. One of the neatest features of the magazine search is a world map that pinpoints locations mentioned in the issue (teleportation device not included, sadly).

Google has also been busy digitizing other content, such as LIFE Magazine’s photo archives last month. How much longer before Google digitizes my college essays? Only time will tell.

I’m loath to part with my copies of Gourmet, Dwell Magazine and The New Yorker, but once Google adds more magazines to its archives, this digitization will hopefully ease my separation anxiety. Hoarding magazines is a heavy habit.