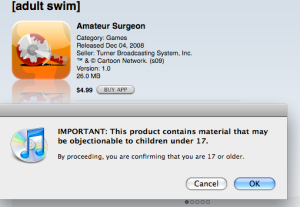 When I saw that one of the opening scenes for Amateur Surgeon — a new iPhone game from the people behind the Cartoon Network’s Adult Swim — contained the line, “Oh my God! I’ve killed a dead hobo!,” I knew this would be different from other iPhone games.

Truth be told, I knew right from instant I went to download Amateur Surgeon in the App Store, because Apple prompts you with the following warning before you can download it:

IMPORTANT: This product contains material that may be objectionable to children under 17. By proceeding, you are confirming that you are 17 or older.

Yes boy and girls, NC-17 content has just hit the App Store. And here I thought Apple employees were a bunch of prudes for removing applications with pictures of scantily clad women. But now, while the floodgates may not exactly be open to all types of adult content — Apple has said in the past that it would keep explicit sexual material out of the App Store — there appears to be some new places that Apple is allowing developers to explore.

Specifically, Apple lists the following warnings on the page for Amateur Surgeon:

Rated 17+ for the following:

You’ll note that both “nudity” and “drug use” make that list. Just how far Apple is going to allow developers to take those two often prickly issues remains to be seen. After all, Amateur Surgeon is a comedy game with cartoon graphics — real blood, violence, sex or drug use may still cross the line. 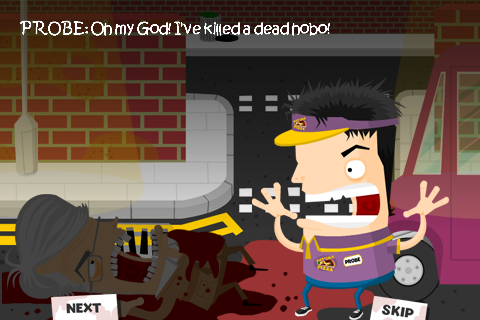 The game itself is likely to live on as as more of an after-thought. It’s a mildly amusing rip-off of games like Trauma Center — even more so than the fun Dr. Awesome.

In the game, you’re a pizza delivery guy using things like your pizza cutter to do surgery on wounded people you find. Just as with Trauma Center you have to go through different steps in a surgery like cutting people open, fixing what is broken, then sewing them back up and cleaning the wounds. The problem is that the gameplay itself isn’t that great. It can be hard to do a lot of the cuts and placements using the iPhone’s touch screen and your finger. You can of course zoom in for more precision, but oddly you don’t use the multi-touch “pinch” to zoom in, rather you use a zoom button. 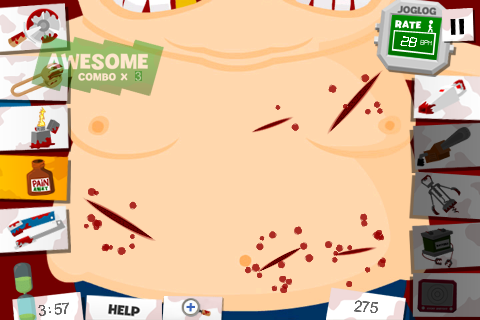 But the worst part about the game is the rather long loading screen between the cut scenes and the missions. I feel like I’m back to playing on my original Playstation again with some of these load times.

Still, it’s a funny game that is pushing the limits of decency in the App Store. While some undoubtedly won’t like that, we would never have games today like the awesome Grand Theft Auto series if someone didn’t start pushing these buttons — so to speak.

Amateur Surgeon is $4.99 in the App Store. Parents: Consider yourself warned.