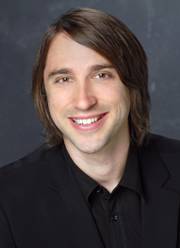 Sony launched its Home virtual world for the PlayStation 3 today, opening up its beta test to all 16 million PS3 owners. We’ve tested Home in a closed beta so far, but now we will find out if it is ready for millions of people. Jack Buser is the director of Home for the U.S. market. We talked with him by phone yesterday about Sony’s plans for expanding the world and what’s there now. [FYI: At the moment, I’m having trouble logging into Home; apparently, it’s crowded]

VentureBeat: You took more than 18 months. That’s a long time. What was the hard part?
Jack Buser: Something like Home has never been done before. It’s a massive undertaking. When you deal as a platform like this, you’re blazing new paths with technology and business. There was a lot of heavy lifting. Now we’re rolling it out and it’s something that can’t be experienced anywhere else. It’s not a game. With a game, you create it, launch it and you’re done. Home is a platform. A lot of the things will be created by third-party partners. You’ll see a lot of people beyond Sony. We had to do all of those application programming interfaces so they could do that.

VB: Can you bring us up to date on who is ready with or preparing content for Home?
JB: Some things we announced will be there on day one. Other things will appear in the coming weeks. Home is this living, breathing platform that evolves over time. We’re really going to emphasize that you’ll notice things later that weren’t there at the start. We have spaces for Uncharted: Drake’s Fortune and Far Cry 2 now. Over time, we’ll see spaces set aside for Resistance 2, Warhawk, Guitar Hero, and Socom: US Navy Seals. That will be staggered over the next two months. We have EA, Activision, Disney, LucasArts, Eidos, THQ, and Ubisoft. You’ll see Activision’s Guitar Hero franchise highlighted in a space, and we’ve already got Ubisoft there with the first two game spaces. 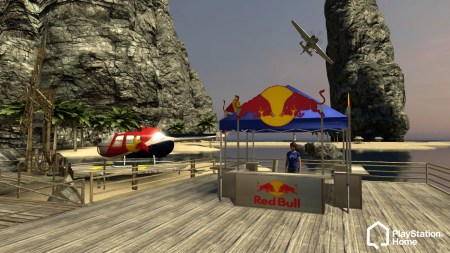 VB: And what about the brand advertisers?
JB: We will have Diesel, an international fashion design brand. They’ll sell avatar custom enhancements such as clothing that will appear in the first few weeks. We’ll have Lignet Roset, a contemporary furniture designer that will sell furniture in Home. It’s quite cool, grand furniture you can use for customizing your apartment. Sony Pictures and Paramount will have content as well, including trailers for upcoming movies. Paramount will bring virtual goods and video content. Red Bull will have Red Bull Island that features an air race world championship. It will be a simulation of the real race that they sponsor in the real world. All of these things are more than just promotional. They’ll give people a reason to come and express themselves about their favorite brands. They can represent how they actually dress in the real world. While most of it is free, Lignet Roset and Diesel will actually be selling things in the mall.

VB: So your e-commerce system is in place?
JB: You got it. 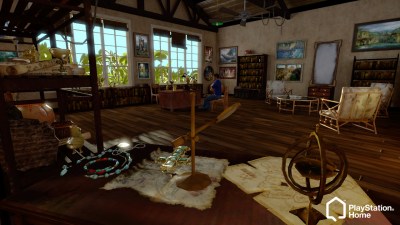 VB: What has come together at the last minute, and how did the beta test go?
JB: We did the beta to test the technology and build a core community that could get excited about the types of events, content, features, and functions that they wanted us to do. We have done load tests to make sure that the system could handle the numbers of people that will come in with the open beta. Some things have come and gone because we were testing them. Now that we’re not testing as much, we’re going to scale it up. It’s going to constantly evolve. Some things we won’t announce, and people will have to find them by exploring. We’ll take our learnings and rapidly build out the world.

VB: Is it going to be fun? A lot of observers have wondered that.
JB: Absolutely. We’ve had beta testers who have gone into the bowling alley and played the mini games. They can play as a group. It’s the kind of stuff you can’t do on any other platform. You can go up to a pool table and chat with someone and get to know them over a game of pool. People told us to have that experience front and center. So one thing we changed was the central plaza, which has a mini game now that four people can play. Bubbles come rising up out of the water and you have to pop the bubbles as fast you can. You can play it with friends or people you haven’t met yet. The other thing we did in the central plaza was make Home much more interactive. You can dance in front of a screen and the people in the dance party can vote on what song will play next. It’s like an interactive social DJ, where they can interact with the music experience now.

VB: You can also create your own clubs now?
JB: When we designed it, we decided we wouldn’t be handing it down from the mountain top. We gathered feedback and they wanted clubs. It complements our suite of offerings to build community. Someone can start their own club based on anything they want, based on a movie or TV show or sport. They can invite club members, appoint sub leaders, and schedule events. We have our own club at Sony that we use for internal meetings. You can go to the club anytime, even if the leader is not there. You can stay in touch and form stronger friendships.

VB: How much does the infrastructure cost to operate and how do you make money?
JB: The whole idea of micro-transactions is behind the business model. It’s easy to use. People can come and use it for free. But there’s a certain percentage of the people who want to look different. They can buy virtual items. These things are priced appropriately so that you can get designer jeans that you like in the real world. You might want to decorate your apartment with interactive furniture that lets you hang out with friends and do things together. This micro-transaction platform is available to third parties too. They can use Home as a new channel to monetize their brand.

VB: What more is there?
JB: It’s a great platform for promotional events. You can immerse yourself in the world of a game, TV show, or something else in an interactive way. This is the first day in the start of a very long journey. Home will evolve over time and we’ll have cool stuff constantly appearing. It will change the way people play games online. Your friends list will mean more to you now because you’ll be playing together. Ten years from now, we’ll see this launch as an important milestone because it brought the idea of online play and online community and put them together so they are one and the same.