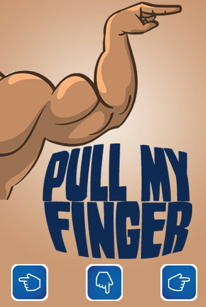 Apple definitely appears to be changing its stance with regards to certain applications it will allow in the App Store. A couple days ago we saw the first NC-17 game be approved, now today Pull My Finger, the app that was once rejected by Apple for being of “limited utility” — which read a lot like “too crude” — has been approved for sale in the App Store!

On its App Store page, developers Air-O-Matic thank many of the publications that covered its initial rejection and note:

Hundreds of thousands of people viewed the demo. Thousands cried out for its availability in the app store. Petitions were formed. Candles were lit. And now, in Apple’s Infinite Graciousness, they have allowed it to be available to you!

Apple, it seems, is gaining a sense of humor about some of these apps. Or at least it’s realizing that it’s a slippery slop if it tries to banish one app based on taste but allows others.

Air-O-Matic goes on to note, “we asked ourselves over and over, why must I always carry a phone, iPod, AND electric fart machine?” Now, we can all produce farts on the iPhone. Thank God.