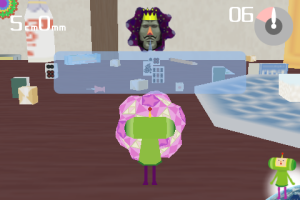 The appeal of Namco’s Katamari Damacy game franchise is kind of hard to explain. Basically, the object is to roll a ball around a level and pick up as much junk as you can to make the ball bigger. It sounds lame, but it’s fun to play and kind of addicting. And its gameplay seems like a perfect match for devices with an accelerometer — like the iPhone and iPod touch — so it’s really no surprise that Namco has just released a version, I Love Katamari, today in the App Store.

Previous players of Katamari games will feel right at home. The King of All Cosmos instructs you, the Prince, to pick up as much junk as possible to grow your katamari (the adhesive ball) large enough to pick up the one big object he wants. But rather than use a traditional video game console controller’s directional pad to move around, you simply tilt the iPhone and touch the screen to direct the katamari.

It sounds like the perfect fit, but there are some issues.

First of all, the controls are a bit glitchy. While they work well some of the time, other times I found myself continuously rolling backwards for no reason at all. It’s as if the accelerometer thought I was holding my iPhone in a different position than I actually was. There’s also an issue with the frame rate in the game, which many of the early customer reviews in the App Store are already pointing out.

But I suspect that updates from Namco will be able to fix both of those issues, and in my opinion neither is a total game-killer for fans of Katamari. The game is still a lot of fun.

The four gameplay options include “Story Mode” (follow a story to find the king’s object), “Time Attack Mode” (get as much junk as possible in a set time period), “Exact Size Challenge Mode” (get your katamari to a certain size) and “Eternal Mode” (basically free mode).