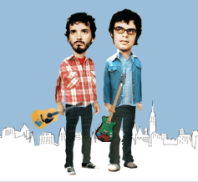 Flight of the Conchords, a series featuring a quirky musical duo from New Zealand, has just debuted on online video site FunnyorDie.com — a month before its season premiere airs on HBO.

Networks have been giving sneak peeks and releasing episodes early online to get viewers psyched for new seasons and new shows for a while now. However, this promotion is part of a bigger pattern of pumping up and priming audiences for a series in a variety of new ways, including lip-syncing contests.

Flight of the Conchords features the musical duo’s misadventures in New York City. (If you want to get technical, they’re “formerly New Zealand’s fourth most popular guitar-based digi-bongo acapella-rap-funk-comedy folk duo.”) You’ll find the episode here on FunnyorDie.com starting today, December 17. Until December 21, you can share and embed the episode to your heart’s content.

After that, the episode will be available on HBO.com, HBO’s YouTube channel and iTunes. However, the official airing on HBO is January 18, 2009 at 10:00 PM.

This promotion on Funny or Die is the online video site’s first shot at airing a full-length television episode; the site is is best known for hilarious short viral videos such as The Landlord (yes, the one you got through mass e-mails from procrastinating friends). HBO took a stake in Funny or Die earlier this year, which may explain why the episode was released exclusively to Will Ferrell and Adam McKay’s site first.

Fans can get even more engaged by entering a Flight of the Conchords LipDub Fansterpiece contest where they can upload a YouTube video of themselves lip-syncing to one of the duo’s silliest songs, “Hiphopapotamus vs Rhymenoceros.” The best clips will get edited together and shown on HBO.

While not quite as challenging as the auditions for YouTube’s Symphony Orchestra, the contest is still a good way to get viewers involved. The call for submissions ends a week after the season premiere on TV, a smart move since the contest will get even more publicity when the episode finally airs.

Networks have also tried the opposite experiment, by restricting access to online episodes, with inconclusive results. Earlier this year, the CW yanked episodes of teen drama Gossip Girl from its site to see if it would jump-start TV ratings. But the change in ratings was insignificant, so the network restored the episodes, preferring that viewers watch them on cwtv.com rather than elsewhere. It also realized that fans would go to great and illegal lengths to get their fix.

It looks like television networks are trying to ensure their audiences don’t forget about their favorite shows in between seasons (or during strikes, for that matter). Hopefully this sort of promotion will keep viewers engaged as well as provide legitimate venues for watching their favorite shows, cutting down on illegal views through YouTube and BitTorrent. I mean, how can you resist this puppy and parrot lip-syncing their way into your heart?