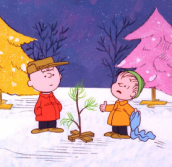 When anyone says “holiday specials,” I think of of Charlie Brown, Frosty the Snowman and Rudolph the Red-Nosed Reindeer. Hulu’s Holiday offering, however, is a bit more educational — the site is adding three new documentaries to its rapidly-growing roster of films.

Today, Hulu is premiering its second exclusive film, Speed and Angels, which follows two Navy fighter pilots over two and a half years, from training in Nevada to their deployment to Iraq.

Amos ‘n’ Andy: Anatomy of a Controversy and America’s Prince: The John F. Kennedy Jr. Story are two made-for-TV documentaries (not that you’ll be necessarily watching them on your TV) now on Hulu. These films will have to compete with the Battlestar Galactica webisode series that was just released on the site.

I used to watch Apple’s movie trailers for the improved quality over YouTube, but Hulu is also rapidly adding more movie trailers to its library, which will only make it more competitive in the online premium video wars. To show its commitment to user experience, Hulu’s also launched a flurry of new features recently, like video recommendations (which works only when you’re logged into Hulu). As of yesterday, a limited selection of videos from Hulu’s high definition gallery are now embeddable, including episodes of The Office and 30Rock. Hooray!