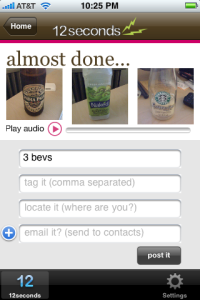 Up there on the list of complaints about the iPhone is that its camera doesn’t support video capture. Well, it can (more on that later), but Apple won’t turn it on or allow any applications in the App Store that use the camera for video. That’s a problem for a startup like 12seconds, an online video application. So it came up with a new way to post to 12seconds with its iPhone app.

The app, which is available now in the App Store for $0.99, asks users to select three still pictures — these can either be new ones taken with the iPhone’s camera or selected from your photo library. Once you’ve chosen the three pictures, you then record 12 seconds of audio to go alongside those images. The result is a three-image slideshow set to your voice-over, that runs for, yep, you guessed it, 12 seconds.

This slideshow is then made into a video complete with the audio you recorded and sent off to the 12seconds web site. Sure, it’s not actually video, but it’s a cute (and more importantly legal) workaround for the iPhone that allows 12seconds to get into the App Store while competitors like Qik and Seesmic cannot.

Speaking of Qik, it does have an iPhone app that works very well at yes, recording live video, but because of Apple’s App Store rules, it is not available in the App Store and there is no indication of when — if ever — it will be. I’ve used it quite a bit, and it’s a shame that Apple and/or AT&T won’t allow it (I suspect it will take up a lot of 3G bandwidth).

12seconds is smart to come up with this alternative app. It’ll help spread the company’s product even if it doesn’t technically record the signature 12-second-long video that gives the site its name.

12seconds, which first launched over the summer, has also now moved into public beta testing. You can sign up here.