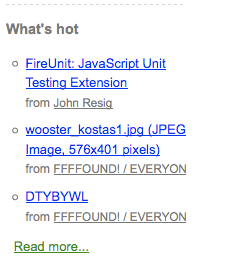 Given the number of people who use Google Reader’s “Starred items” and “Shared items” features, you’d think Google would have some very good data for creating a killer “best of” area for stories across the web. In the past, people have talked about how such a feature could be a “Digg killer,” but Google has passed on such an opportunity — thus far. A new feature quietly rolled out this week may indicate that it is coming.

The Official Google Reader Blog has added a new “What’s Hot” sidebar item that “shows some algorithmically generated stuff that is interesting across the web,” a post on the blog notes. And this isn’t just a sidebar item, it has its own shared page just like every Google Reader who shares items has. This means that yes, you can subscribe to it and see some of “what’s hot” across the web.

It’s not entirely clear how Google is generating this hot list other than that vague description that it is “algorithmically generated.” It’s possible that it’s not using Google Reader data at all. In fact, from the look of the URL for the page, it would seem to be a single Google Reader account that has labeled certain items as “cool.”

Certainly, you can assume this page is not using user’s Starred item data, since that isn’t supposed to be public, but Shared items are public, so it would make sense to Google to crawl those, find the most shared items, and highlight them. Other services, namely ReadBurner and RSSmeme do this already.

Eventually, I believe that will be a part of Google Reader. And this may well be the first step.