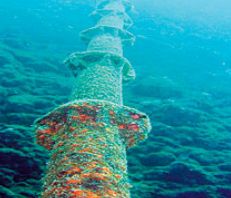 Three undersea data cables linking parts of the Middle East and Indian subcontinent to Europe have been damaged or entirely cut, a problem that will cause serious connectivity issues for several countries, and sporadic problems for a handful of others, for a week or more.

The cables, which run under the Mediterannean eastward to Egypt, are FLAG FEA, SMW3 and SMW4. The three carry most of the data moving between the regions, and it appears that Egypt and India have been hardest hit. Government websites for both countries are currently unavailable from the United States.

Last night brought the first rumors of problems from users in Malta. Now people across the world are finding connections problematic, not only with Internet, but with mobile phone connections, which often skip from satellites to hard connections for international calls. What’s prompting the most hand wringing, however, are the effects on traders, who need connections with minimal latency. Having to wait minutes, or even seconds, for data on prices or trades to transmit will force many institutional traders to close shop until repairs can be made.

It doesn’t seem particularly unlikely that three undersea cables could be accidentally cut all at once — all three run along a similar route and share some “landing” points on shore. Chances are good they were cut near one of those shallow landing points, where they would be more clustered. The only oddity is that the trio could be sheared through at once, as the cables are not only heavily armored but also buried.

But as in the case this January, in which four cables went at once, it appears most likely that a large trawler dragging an anchor did the deed, shorting out the world economy for the price of some seabass.

This occurrence is beginning to look like one of tech’s big annual stories — with cables criss-crossing the world’s bodies of water, and fishing trawlers moving into ever more remote areas in search of declining fish stocks, chance may dictate that multiple cables are damaged fairly regularly. And with the world increasingly reliant on strong connections, the economic damage will increase each time.