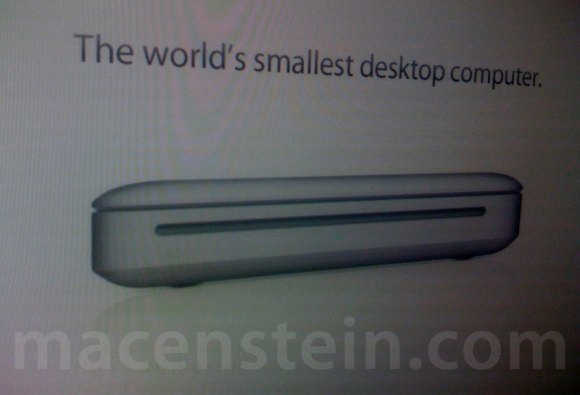 Is the image above the new Apple Mac mini? That’s what an anonymous tipster tells the Apple blog Macenstein.

But is it real? It certainly has a look in line with Apple’s newer aluminum laptops, but anyone with the appropriate Photoshop skills could make something passable. More interesting is the weird top lid-looking thing. It’s hard to see what that could be useful for, the current Mac mini doesn’t have one, but Apple Time Capsules (Apple’s router and external hard drive device) do.

To me, it looks like someone easily could have taken a picture of the front of the new MacBook, Photoshopped out a few things and put a slot-loading drive in there. Doesn’t the image on the right look similar? Yeah, that’s a MacBook.

The slogan shown reads: “The world’s smallest desktop computer.” And indeed, this thing is tiny, but is it too tiny to fit in all the components standard in the Mac mini? It’s almost as small as the Apple TV but has at least one big advantage over that device — an optical drive. If this is real and that slot can be a Blu-ray drive, and this thing has an HDMI output, I’d buy this in a second to hook up to my TV.

It seems fairly likely that an updated Mac mini will be one of the products Apple shows off at Macworld in a few weeks. Wired claims to have a source inside Apple saying the device is coming, and configuration files within OS X were recently uncovered that show iMacs and Mac minis based on the new NVIDIA chipset, Mac Rumors reports.

Apple hasn’t updated the design of the Mac mini since it was first introduced in 2005. The device hasn’t gotten an update of any kind since 2007. In the Apple universe, that product neglect is almost unheard of and has led to some rumors of the device’s death.

Macworld may not have a Steve Jobs keynote this year, but you can bet there will still be some products that Apple unveils. The Mac mini could well be one of them, but whether or not it will look like this is another question.