Unhappy with the gift cards you got this year? Fret no more, the Internet is here to save you. Sites like Plastic Jungle, Swapagift and Cardavenue let users to buy, trade and sell gift cards.

You can buy gift cards, many at a discount (which seems to average between 8 and 15 percent) from private sellers or from the site itself. Or you can trade them like baseball or Pokemon cards with others. For example, you can swap a $25 Macy’s gift card for a $25 Kohl’s gift card. Some sites allow you to set a declining value as each day passes or give buyers the option to make an offer at any price. Finally, you can either sell your card in the marketplace to other users, or directly to the site itself. Registration is free, but buying and selling from other users will costs a small flat fee or commission, depending on the site.

Plastic Jungle provides users with two options for selling cards — a cash amount or a slightly higher amount in the form of (surprise!) an Amazon.com gift card. Ironic, but because Amazon has so many retailers and offerings, users who are unable to trade their cards may be swayed. Swapagift and Cardavenue don’t offer Amazon gift cards. Out of the three sites, Plastic Jungle is the easiest to navigate and browse, and it doesn’t require user registration to peruse listings for card trades and sales. 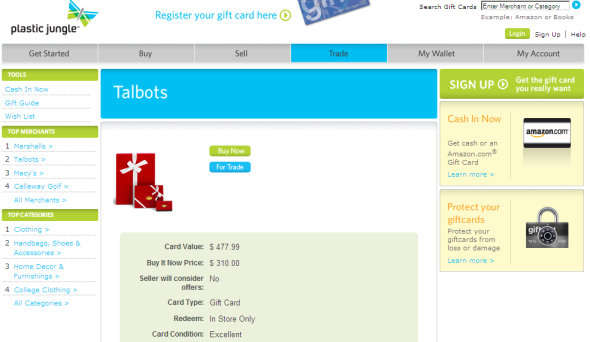 The top category of cards for sale/trade on Plastic Jungle is currently clothing, which isn’t surprising — cash is probably much more useful in this recession than an ugly Christmas sweater. The online model reminds me of the offline methods of secondhand stores like Buffalo Exchange that buy, sell and trade used clothing. You can walk away with cash or a slightly higher value in trade, which gives you the pick of existing store merchandise. It also gives me nostalgia about bartering through the computer game The Oregon Trail (hunting was way more fun, though).

While gift card spending was up 25 percent in 2007, an estimated 10 to 40 percent fewer were bought this year, according to The New York Times. Shoppers preferred steep bargains on actual presents rather than gift cards and certificates with set values. With stores like Circuit City going bankrupt, there was also the danger that the retailer might not be around to redeem the card in time.

To try and combat the decline in gift card sales, stores have had to innovate. Target, a leader in gift card designs, switched from using magnetic strips to bar codes, which means that the gift card can take on forms other than a flimsy plastic rectangle. This year, the store offered gift cards in the form of a minuscule digital camera, USB drive, container of M&Ms and a night light, among others, which is pretty neat. But I’ll still take paper in the form of cash or checks over plastic gift cards — wouldn’t you?

It seems to me that the only cards that everyone was really clamoring over this year were from iTunes and Best Buy — and that could be because I was surrounded by tech lovers. I’m not sure how these gift card exchange web sites will perform given the decline in gift card popularity, and the percentage of people who don’t even use their cards. However, any value or money I could get for an unwanted gift card is better than nothing at all.