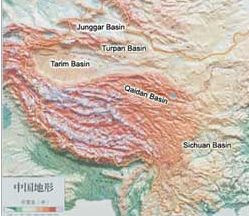 China gets a lot of flack for all the coal plants it builds. However, there’s been some evidence that the country could step out as a leader not just in pollution, but in renewable energy too. Two companies have unveiled a plan to build a power plant in the Qaidam Basin of  northwestern China containing a gigawatt of solar panels, or enough to light 20 million of your 50 watt lightbulbs at any given moment.

Some very large solar facilities have been planned to date, but they’re usually done with solar thermal, an entirely different technology. Solar panels are usually installed in the kilowatt to single-digit megawatt range — and a gigawatt, by the way, is a thousand megawatts. So the plan for the Qaidam Basin plant goes far beyond the average scale.

However, it’s not unprecedented. Earlier this year PG&E announced its own plans to build an 800 megawatt facility in California’s San Luis Obispo County. The Chinese companies, China Technology Development Corp. and Qinghai New Energy, plan to exceed that number by a cool 25 percent.

The other notable point of the plan — which seems rather thin on details — is that the Qaidam Basin project will mix traditional silicon photovoltaics with newer, less-proven thin-film panels. The United States has its own set of famous thin-film companies, like First Solar and Applied Materials (which sells manufacturing equipment), but it seems likely that CTDC and Qinghai are planning to use a native company, which may be little known at the moment.

I should also note that it seems as likely as not the plan will never fully come to fruition — the initial investment will only be enough for 30MW of the planned thousand. But with plans for solar installations of this size multiplying, it’s looking more certain that they may become common in the future.