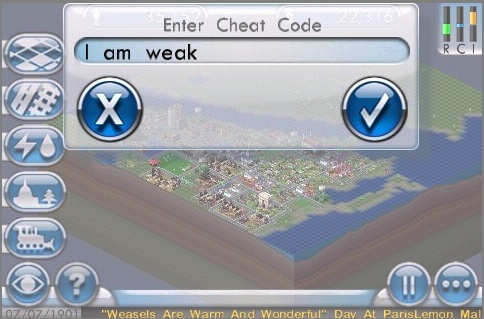 When I first wrote about SimCity coming to the iPhone back in November, the first question someone asked me was if the cheat codes would work. Managing a city can be rough — some people just want to build stuff and see what happens without having to worry about money. Well, I have good news for that crowd: the cheat codes do work — at least some of them.

Following the launch of SimCity in the App Store, people again asked about the use of cheat codes. Commenter Jason P today informed us of the trick to bring up the cheat code input box: simply shake the iPhone. Once you do that, you’re greeted with a box that says “Enter Cheat Code.”

It appears that there are two known cheat codes that currently work. Entering “i am weak” into the box allows you to build anything for no cost, while entering “pay tribute to your king” gives you all of the reward buildings without you having to earn them.

SimCity addicts may recognize those codes from earlier PC versions of the game. But I tried some of the other classic codes including “call cousin vinnie,” “llama” and “porntipsguzzardo,” but those don’t seem to work. Still, it’s nice of EA to throw in this little easter egg for those of us that are, in fact, weak.