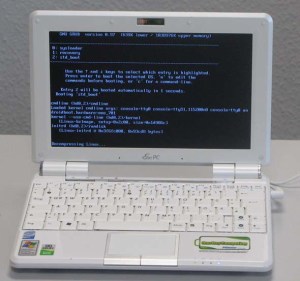 Since our post yesterday about Google’s Android platform running on netbooks, we’ve been asked a lot of questions. Here are the most frequent questions, along with our answers.

Do you think Android could run on laptops or PCs?

The simple answer is “yes, with an asterisk.” The operating system Linux runs on PCs and laptops, and Android uses a Linux core. But the reason for the “asterisk” boils down to an important difference between Android and Linux.

Android is a little different once you move beyond the central part of the operating system, the “kernel.” Specifically, Android doesn’t run the so-called “X Server,” which provides the needed drivers for graphics in Linux. The Android solution for graphics is slightly different. Android offers a so-called “framebuffer driver” which provides basic high resolution graphics. However, these framebuffer drivers are usually very slow compared to the drivers which are provided with the Linux X-Server solution. A sole “framebuffer solution” would create very slow graphics when applied to laptops or PCs. For reference, the T-Mobile G1 graphics driver is specifically written to support accelerated 2D and 3D graphic operations. Android laptops or PCs would need their own solutions.

Another related point is that nearly all applications written for ‘normal’ Linux desktop environments need this X-Server. These Linux applications would need to be adapted to run on an Android PC or laptop.

Our post yesterday was only meant to show how much is possible at the moment. Considering the projects being pursued by Google and OHA, we may indeed see Android on laptops or PCs. Particularly, the NativeClient project can be seen as an indicator that Google has ambitions in that direction. Based on our observations of the current efforts, however, Google doesn’t think it’s time yet to have Android on laptops or PCs.

Are laptops or PCs too complex as pieces hardware compared to a netbook?

No, they are not too complex. Again bear in mind the comparison to Linux. The main differences between Android an Linux are the ones we just mentioned. All usual drivers which are available for Linux will work for Android.

How far away is Android from mass adoption as an OS for laptops and PCs? Will we see a Google OS in the short time?

We don’t know. To our best knowledge we all can only speculate as eWeek recently did when they reported that a third of the Web traffic streaming out of Google’s Mountain View headquarters is coming from computers using a clandestine operating system, possibly a Google (Android related) operating system. That’s because they tracked the traffic, and none of it matched the tags identified with known operating systems.

Android needs substantial additional effort to be ready for mass adoption as an OS for PCs and laptops — but who knows what Google is planning. Chrome and Android itself were in development for many years before they were revealed to the public. Our experience with Android is that a lot of news leaked about it to the public actually does not end up being accurate; it’s highly speculative. Google has separated most of the Android team. Its core is in Boston and Android employees do not have much contact with non-Android Google employees.

Looking only at known facts, we can only evaluate Google’s technological projects like Android, Chrome, Gears and NativeClient. We can observe a strong push to create powerful browser-based applications. Today’s browser-based applications like Google Docs may be seen as early version of that vision. As we said, we can only speculate that the direction of these projects is the creation of a platform which will run desktop like applications as powerful as their native counterparts that we see today.

To achieve competitiveness, a Google OS would then need to enable a strong application like Adobe Photoshop to run in the browser. Google potentially has many of the pieces required to for an “online OS”. Android would be a cheap OS for hardware manufacturers. We may look at Chrome, with all its extensions, as an desktop environment at some point. That environment would be particularly powerful combined with the computer cloud which Google may provide with something like a Google’s AppEngine. But all of that is speculation.

Why does Google not use Linux?

Android addresses many issues Linux does not address. Technically, the Android story is unfolding on at least 3 levels. According to Android’s Rich Miner, Android is:

1) An Open Source mobile phone platform that encompasses every layer of the phone;

2) A series of phones powered by that platform;

That definition is from a presentation Miner had at Stanford in November 2007 called “Android: Building a Mobile Platform to Change the Industry.” If you are interested in Android, the 70 minutes video is worth viewing. He also held a short version of that presentation at GigaOm’s recent Mobilize conference.

For reasons why the industry needs to be changed, I suggest readers look the developer hype at the end of the 90s around Palm, which was bigger than the current hoopla surround Apple and its iPhone in some respects. I also suggest doing some research into what some Android founders have to say about what they consider “failings” of Danger, their previous company (which, incidentally was purchased by Microsoft last year). I also suggest you talk with veteran mobile developers about the bruises they got in the last decade. In many ways, Android is trying what Danger was meant to be. It is particularly interesting to see how carriers react to Android as we reported before.