In discussions about the conflicts in the Middle East, one of the consistent, sensitive points of debate has revolved around the question of media bias in covering any related events — which is why the adoption of online communication mediums like Twitter and YouTube in the chatter around the most recent Gaza conflict is both timely and interesting.

In reading up on the current situation, you may have chanced on the Israel Defense Forces’ YouTube channel, blog, or even the press conference the New York Israeli Consulate held via Twitter (transcript here).

And you may also have come across the Gaza government’s (i.e., Hamas’) YouTube-knockoff channel, AqsaTube, and related site, available in 8 languages.

The use of online tools for political PR isn’t by any means new. And the concept of seeking out the relevant channels to reach a mass audience is as age-old as any means of public communication. Still, the way these channels (particularly those that fall into the social-media bucket) are being used reflects an apparent understanding in their inherent potential to breed a sense of transparency and accountability, which are critical to any successful PR push.

Running a press conference on Twitter gives people the sense that they can each act as a ‘citizen journalist,’ per se. You have a question for the IDF? Ask it via Twitter and you might just get an answer — minus the red tape. Liberating, isn’t it? To some extent, sure. At the very least it gives you the feeling that it is. And that feeling might drown out your reaction to — or perhaps even ignorance of — the reported struggle to actually allow foreign reporters into Gaza. 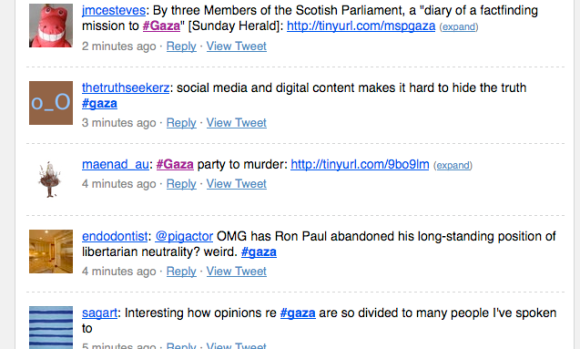 So, despite the play of these more social online outlets in the overall coverage and discussion of the conflict, you might still find it difficult to unearth truly unbiased related journalism. Sure, there are protest and bloody warfare photos on Flickr, ongoing rants on Twitter (at the time this article was written, the hottest topic on Twitter was #gaza) and the more sensational news stories bookmarked on Digg. And there’s much information to be digested there. But, considering the sources, much of what you’re reading is still biased.

So whereas before one could blame the media for too easily succumbing to the PR machines, these machines are now out in our own element — our social nooks online — and up for our own interpretation and reaction. Call it a heightened need for citizen vigilance.