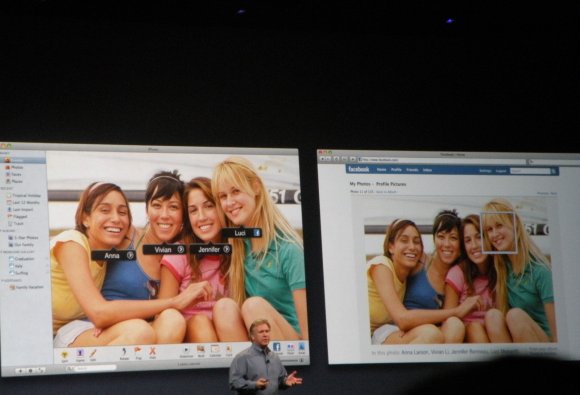 Google finally launched its photo software, Picasa, for the Mac yesterday. It offered a nice alternative to Apple’s iPhoto, namely the ability to sync with a good online photo service, Picasa Web Albums. Of course, that was launched one day before the Apple keynote at Macworld. Today, Apple responded with iPhoto ’09, which looks like it will blow the new Picasa out of the water.

While none of us have tried iPhoto ’09 yet, Apple executive Phil Schiller’s demonstration on the stage looked great. By far the most powerful new feature to me is the ability to tag faces. Using face detection technology, Apple can find the same person across various pictures. It likely won’t work perfectly, but Schiller’s demo looked very, very good.

Even more powerful is that you can tag people in photos and sync them with Facebook. To me, that’s always been a powerful feature of Facebook’s photo service. And now that it can sync — yes sync both ways — with iPhoto, it’s even more powerful.

Another big addition to iPhoto is the ability to geotag pictures. This is my favorite feature of another photo service, Yahoo’s Flickr. iPhoto’s geotagging looks to work much the same way as it does on Flickr, but there’s one key area that’s better: You can easily type in the name of a place, and iPhoto will recognize it from a database of places. This should be easier than being forced to tag locations on a map (which you can also do in iPhoto).

If you really love Picasa Web Albums, you’ll still want to use the new Picasa, but for everyone else, I have to think iPhoto ’09 blows it out of the water. It was nice of Apple to give Google one day to live on the Mac.

For the full thread of our live blogging, go to our Friendfeed room.