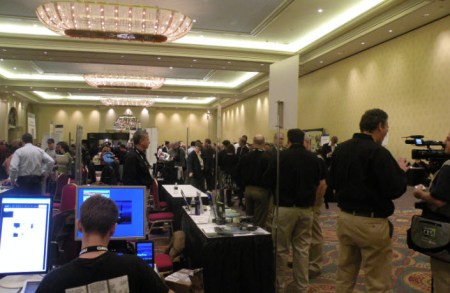 This evening I went to CES Unveiled, the beginning party for journalists at the International Consumer Electronics Show in Las Vegas. The place was packed with the usual tech journalists. We were in our own little bubble of excitement while the world economy melted down outside.

Midway through the event I ran into Gary Shapiro, who reminded me he is the president and chief executive of the Consumer Electronics Association, not the executive director as I called him earlier. (Oops). He told me that things look good for the show and he really didn’t mean to imply (as he said in our earlier interview) that attendance would be measurably down. He said the show is likely to draw 130,000 attendees, but that’s the estimate they give out every year because they really don’t know what will happen. He assumes they will take some hit from the recession compared to the 141,000 attendees of last year, but so far things look good, he says. Somehow, I don’t think he’s going to get a bigger crowd than last year. We’ll find out later in the week, although audited numbers will come much later. 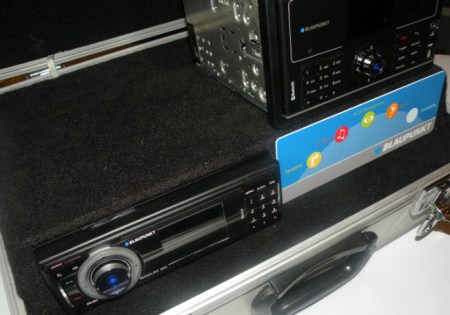 In any case, Shapiro told me to check out the Blaupunkt table. And the car audio company’s product was pretty cool: the first Internet radio for cars. This car stereo can play 20,000 radio stations. You could spend your time endlessly scrolling through those on a drive from San Francisco to New York. But it uses a service dubbed miRoamer from startup Torian Wireless to get its music from the Internet.

With the push of a button, you can switch from AM/FM radio stations to tens of thousands of Internet radio stations. You can browse by country, genre, station and keyword. You can also go to the web portal with a PC and instruct your device to play only certain preset radio stations. That cuts down on the browsing time. If you don’t want to do that, you can cruise through the top-100 feature on miRoamer.com.

The radio gets its music streamed in real time via a Bluetooth connection from the radio to your 3G cell phone. I’m not sure it’s going to work, given the spottiness of 3G coverage in the U.S. But you have to give them credit for trying something ambitious. The Blaupunkt guy told me that if you’re speeding fast, you’ll need higher bandwidth to make sure the radio reception doesn’t get choppy. There may be a reason no one’s tried Internet radio in the car before, but if it works, it’s going to change the landscape for players like XM Sirius satellite radio.

It will cost $349 to $399 in the U.S. when it ships in the second half of the year. There will be two versions, one that occupies a single radio deck in a car and another that occupies two. It’s not clear whether Blaupunkt will charge a subscription fee or will make the service available for free. 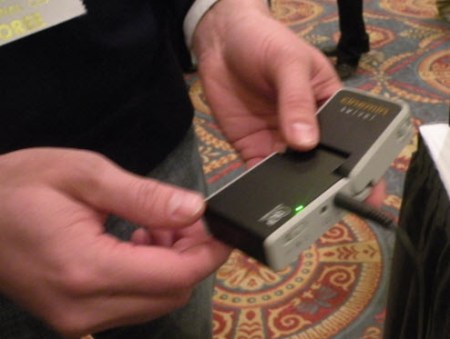 For those of you who aren’t easily impressed with a first of that sort, I thought WowWee also had a cool product line with its Pico Projectors, dubbed Cinemin. Ranging from $299 to $399, these are tiny projectors that can show a movie on a ceiling, wall, or anywhere else you can find a blank space. The three products include the Swivel, which can tilt up 90 degrees so you can watch a movie on the ceiling, the Stick, which has on-board memory to store movies that you can take on the go; and a Station model that is more for office conference rooms but is still smaller than a lot of today’s projectors. They will come out at varying times from the second quarter to the fourth quarter. The products are based on Texas Instruments’ Digital Light Projection technology, which is commonly used in rear-projection TVs and consists of chips with lots of microscopic mirrors to project light. 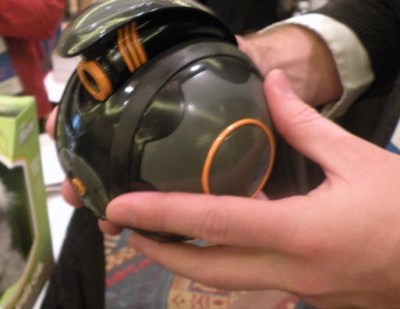 WowWee, of course, is best known for its consumer robots. It had a few at the table this year, including a Spyball, which is a little ball with a web cam. Michael Rush of WowWee was reluctant to let it roam around the room full of hundreds of journalists because he figured someone would step on it. Its wheels are retractable. When they’re out, Spyball can go rolling around a house, spooking the pets and spying on whoever you want. Ah, just think of the civil liberties violations you can perpetrate with this sucker, which sends videos back to your computer or game machine via Wi-Fi. It costs $149 and will be out in the fourth quarter of 2009. It’s a lot like last year’s model from WowWee, the Rovio moving robotic web cam. But this one has a better, Orwellian name to it. 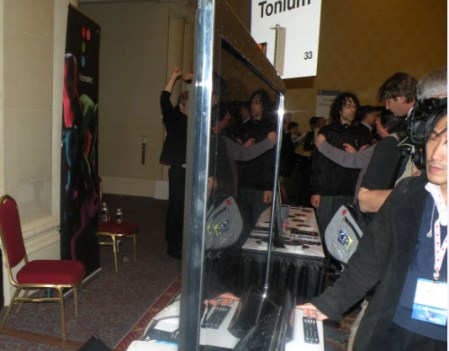 LG also showed off a new liquid crystal display television that was less than an inch thick. We’ll see if that winds up being the thinnest of the show. You can never tell. I’m sure we’re going to see a lot of cool new TV technology at the show. I’m looking forward to seeing the newest generation of organic light-emitting diode (OLED) ultra-thin TVs.

On the plane, I sat next to Dhaval Ajmera, an executive vice president from Verismo Networks, a Mountain View, Calif.-based company with a pretty cool VuNow set-top box that brings all sorts of Internet video into the TV. Verismo has 70 employees and is privately funded. It isn’t seeking money at the moment; rather, it’s trying to generate some revenue first through sales of its $99 and $149 set-top boxes, which compete head to head with boxes from Roku but offer much more than just Netflix’s selection of 10,000 movies. Verismo has all sorts of content, from YouTube to CinemaNow movies.

Tomorrow, check back in this space for reports from all of the big company press conferences, starting with LG in the morning and going through to Microsoft CEO Steve Ballmer’s keynote speech in the evening. I’ll be covering most of it.