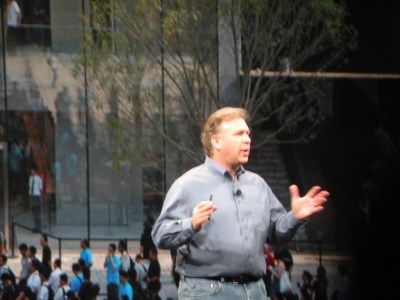 I knew this going into the Steve-less Macworld keynote speech. Phil Schiller is a good speaker, but it’s a letdown.

Schiller is just about done with his keynote speech at Macworld now, so it’s time to give you a little play by play on what it feels like to listen to him.

I’ve been to a bunch of Steve keynotes. Phil has the appropriate enthusiasm in his voice for a keynote speaker, but he isn’t a Steve Jobs clone. Schiller hasn’t slipped up yet. But he’s spending all of his time in the products he’s talking about. He’s not making jokes, unless you count the little jab at Bush, when he showed off a new slide presentation feature in the Keynote 09 product that lets you flip a word over and turn it into … Obama.

Phil isn’t Steve. There’s nothing here like the little prank call he made when introducing the iPhone: he called a local Starbucks while on stage and ordered 4,000 lattes.

Schiller also doesn’t have the magic touch with the reality distortion field. For instance, when he started talking about neat new features in the word processing and spreadsheet programs in the iWork suite, he reminded me of someone from Microsoft. I can only get so excited about whether Apple’s programs are a match for Microsoft’s Office. So why spend the time on it? I hope there’s more to come. Having said that, all of the new features in the iLife 09 suite — with new versions of iPhoto, iMovie, etc. — are great. When Schiller talked about those advances, I could hear oohs and ahhs. And I was interested in those myself, considering how awkward the software on Windows Vista is for doing the same thing.

Even so, many of the features in the new iPhoto are things I’ve seen before. A startup from Hawaii, iLovePhotos, showed similar features off at the recent Demo conference. You can do face detection with the new iPhoto, just as you can with iLovePhotos.

Now he’s talking about the speeds and feeds of the new 17-inch Macbook Pro laptop, which has Nvidia graphics and big hard drives, etc. “This is the coolest notebook,” Schiller says, but not quite in the same vein as Steve. The biggest news about the new laptop: battery life that lasts eight hours, three hours longer than previous versions. That’s great. Of course, in Apple fashion, there’s no way to change the battery yourself. You have to take it into a shop unless you’re handy at disassembling your notebook. They’ve spent more than five minutes talking about batteries, but all I really want is a battery that won’t fry my computer.

So at this point in the keynote, I can’t say I’ve seen a stunning performance. You can blame that on Apple, not Schiller, I suppose. But maybe Steve decided not to present because there just wasn’t anything stunning. Now I’m posting this before the “one more thing” moment. But this is instant analysis in real time, baby.

Update: The last thing is on iTunes. Apple has sold more than 6 billion songs since 2003. Ten million songs are available, and there are 75 million accounts using credit cards. There’s a new three-tier pricing for songs, too. Music companies can now charge either 99 cents, 69 cents, or $1.29.

Um, that’s still pretty low on the innovation meter. The next change is iTunes Plus, which is the DRM-free (digital rights management) higher bit rate versions of songs. Now Apple and the major music companies will offer 8 million songs DRM-free. And by the summer, all of the iTunes songs will be DRM free. That’s good, but something that should have happened a long time ago.

Lastly, the iTunes music store now supports WiFi and 3G cellular networks, for the same price, same selection of 10 million songs, and same 256-kilobit quality. So you can preview and purchase music immediately on your iPhone. It will sync that purchase back to your computer. That starts today. Phil has now surrendered the stage to … Tony Bennett, crooning “The Best is Yet to Come” and “I Left My Heart in San Francisco.”

For our full thread on live keynote posts, go to our Friendfeed room. Let us know how you liked the Friendfeed room; we may do more of it for the Consumer Electronics Show coverage.