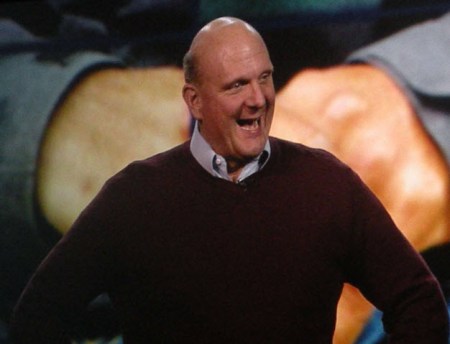 Ballmer’s first CES keynote was a little light on hard news. There was no Zune phone announcement (rumor was Microsoft would do it to compete with the iPhone), and he didn’t address the pending layoffs that are rumored at the company. But he did announce the Windows 7 beta, including some cool features with Windows Live Essentials, and he took the crowd into a cool demo of how we could use computers in the future with much better visual and multi-touch user interfaces. I’m happy to see some hard dates for the next Halo games coming down the track, though both of the games seem to be taking a lot longer to get to market. And it looks like Microsoft’s Xbox 360 has some serious momentum in becoming a centerpiece of the digital living room, even if it isn’t beating Nintendo’s Wii console.

That’s the substance of his keynote in a nutshell. Full details follow in the blogging I did live during the speech:

LAS VEGAS — Steve Ballmer is giving the keynote speech for the first time at the International Consumer Electronics Show in Las Vegas. He opened with a couple of jokes: He said Bill Gates told him not to go to the other conference in Las Vegas (the adult entertainment show). And he said Jerry Yang couldn’t understand why Ballmer kept ignoring his Facebook friend requests. He is positioning himself as the true believer, the one who believes in the personal computer and the Windows operating system.

“I am a PC and proud of it!” he said, a reference to Apple’s TV ads that make fun of a pudgy character who identifies himself as a PC.

Today, he said, Microsoft is releasing the beta of Windows 7, the successor to the much-maligned Windows Vista operating system.

“We are on track to deliver the best version of Windows, ever,” he bellowed. His voice really carries in this hall of 5,000 people at the Venetian Hotel ballroom in Las Vegas.

Without making any reference to expected layoffs at Microsoft, Ballmer said that Microsoft invested $8 billion in research and development in 2008 and will continue to invest heavily during the economic downturn. He said that companies that invest in innovation in the downturn will position themselves for the future.

“No matter how hard the recession, I believe that our digital lives will only get richer,” he said.

He predicted that within a few years, computers will go through a user-interface revolution.

“The computer will be able to hear you and see you,” he said. 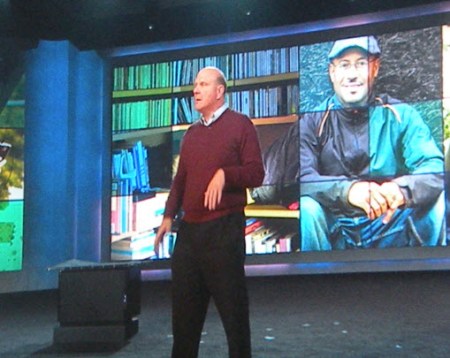 Ballmer said that Windows would continue to remain the center of your technology solar system, even as Windows moves to phones and other devices.

Ballmer said there are 11 Windows Mobile phones that have each sold over 1 million units. That’s of course the market where Microsoft is getting trounced by Apple’s iPhone. But here’s a plus: Verizon will use Microsoft’s Live Search on all of its Windows Mobile smart phones.

6:59 pm: Ballmer has given up the stage for a demo of Windows 7, which makes it easier to move around among different objects or windows on the desktop.
7:03 pm: Windows Mobile phones this year will get a new version of Internet Explorer that can run Adobe’s Flash software and perform tasks like booking an airline flight via a mobile web page.
7:07 pm: Windows Live will have a news feed that aggregates your communications. For instance, if you update your status on Facebook, the message will show up on your Windows Live Feed. A variety of partner sites, like the user restaurant review site Yelp, can be integrated into Windows Live in the same way.

Here’s a description of the Windows Live details:
— Final versions of Windows Live Essentials including Windows Live Mail, Windows Live Messenger, Windows Live Writer, and Windows Live Photo Gallery are now available for download at www.windowslive.com/explore.
— Facebook has signed on as a Windows Live feed partner. In the coming months, Facebook users can choose to share content they post on Facebook -– including photos -– directly with Windows Live.
— Dell will pre-install Windows Live Essentials on its consumer and small business PCs globally beginning in February. This means customers will have instant access to the applications they use most — email, IM, and photo sharing and editing -– all for free.
7:10 pm: Dynamic display picture can be used in Windows Live Messenger, Microsoft’s instant messenger client. That means you can click on a happy face or a sad face and your own animated image that your IM friends see will look happy or sad.
7:15 pm: The band Tripod sang its song about a guy who is playing video games while his girlfriend is waiting for love.

7:16 pm: Robbie Bach, head of the Entertainment and Devices Group, has taken the stage to talk about connected entertainment. Bach says Ford is launching a new version of Sync this year that will make use of the voice-driven user interface for the automobile. Sync lets you do things like use your voice to dial your cell phone or change your music in the car.

7:19 pm: Windows Media Center now has 10 million users a month who use it an average of 90 minutes per session to navigate through the entertainment on their computers. 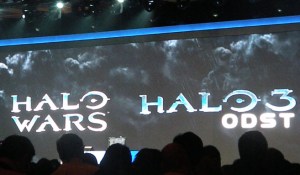 7:20 pm: Mediaroom, Microsoft IPTV service that AT&T is marketing as Uverse, is expanding with SingTel, which will let you go backwards to watch a TV show from the previous week that you may have missed.

7:21 pm: Microsoft had its best year ever for Xbox 360 sales, with total consoles sold over 28 million. (Nintendo has sold more than 40 million Wiis). He says the consoles are at the right price point now. Xbox Live has 17 million members (as Microsoft. announced earlier this week).
7:22 pm: Halo will return in 2009 with Halo Wars starting on Feb. 28. That’s a strategy game. A downloadable version is available Feb. 5. Halo 3 ODST will be an action game shipping this fall. Halo has crossed into tens of millions sold, though Bach didn’t say exactly how much.

7:24 pm: Xbox Live has had 10 billion hours of games played and social interaction. Since Microsoft launched a new version of Xbox Live’s interface in November, the number of downloads is up 60 percent and users have 33 percent more friends than they used to. 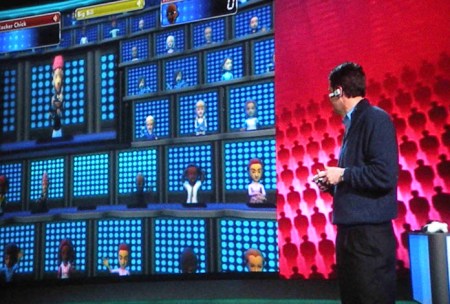 7:25 pm: In the spring, Microsoft will launch Xbox Live Primetime, where Xbox Live members can watch and participate in live events. One example is the game 1 vs 100, where one person must out-answer 100 people in a trivia contest. That game and service will launch in the spring.

7:29 pm: There are now 45 movie studios and other entertainment providers worldwide who are making content such as movies and videos on the Xbox Live Marketplace. You can cruise through 10,000 movies on Netflix, a service that launched on the Xbox 360 late last year. With a game controller, you can pan through a show and look at segment pictures to figure out exactly where you want to pick up the play. You can organize your Netflix viewing queue on a Windows Mobile phone and reorder the movies. 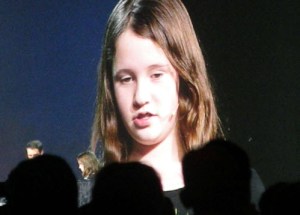 7:33 pm: Bach says the Xbox Live Community Games Channel is letting amateur game developers create and launch their own games for sale on the Xbox Live Marketplace. This year, Microsoft will ship Kodu, which will let kids create their own games on the Xbox 360 and share them with friends. To demo it, Bach had a 12-year-old girl up on stage creating her own game. After creating the game, she played Bach at it and beat him.

7:39 pm “Anyone who thinks he threw that game, that would be wrong,” Ballmer said as he came back on stage. Moving on, Ballmer said that software will soon begin taking advantage of the new processors on each microprocessor chip that Moore’s Law (the continuous advance of the electronics technology) will keep on delivering. Software will at some point predict what you need and do things for you, like planning trips. 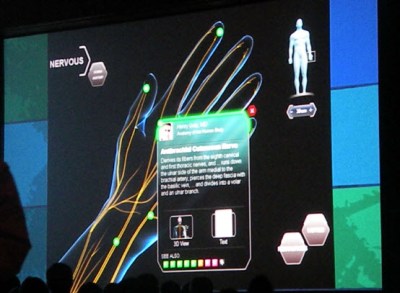 7:41 pm: By way of wrap up, Ballmer invited a Microsoft researcher on stage to show off future technologies. Like in an anatomy class, you could view a 3-D model of the inside of a body and maneuver through it. As you stop on different points of the body, the software could bring up windows that explain what you are looking at. You could also bring in friends to view the same thing as you study together. It looks pretty nifty. “That’s my brain on Starbucks,” Ballmer joked.

These technologies could be used in conjunction with Microsoft’s Surface smart table technology. And then you can look up all sorts of things, mix and match your research work, and otherwise play around with the data the way Tom Cruise did in the movie Minority Report. Surface is already on the market, but these uses for it are still off in the future. 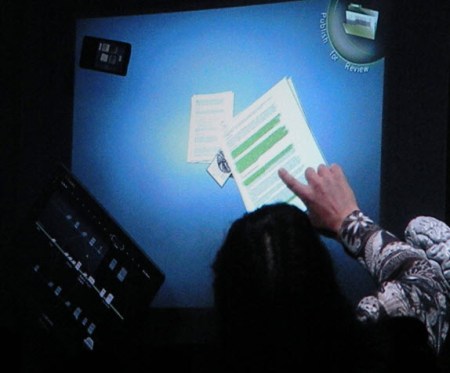 This is not a bad way for Ballmer to wrap things up. When you don’t have a ton of things to say in your keynote speech, then bring out some gee-whiz demos. They may never turn into real products, but they’ll at least be good keynote time-killing fodder.

7:49 pm: And that’s a wrap. Tripod is playing again on the way out. Take a look at Rob Pegoraro’s post of the same event. Rob, who works at the Washington Post, is sitting next to me.