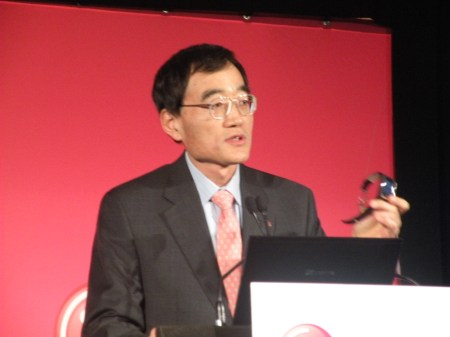 South Korea’s LG Electronics kicked off press day at the International Consumer Electronics Show this morning with a flurry of new technology and product announcements.

Other TV makers will likely match some of these announcements, but LG’s focus on mainstream consumers suggests that some technologies that have been talked about for a while — like the ability to move wireless video around the home — are ready for prime time.

Woo Paik, chief technology officer and one of the fathers of high-definition TV, spelled out some of the technical advances, including a watch phone with a touch-screen interface.

Paik also said the company will get rid of networking wires attached to its flat-panel TVs by integrating WirelessHD, the 60-gigahertz wireless video transfer technology developed by SiBEAM. With a range of about 30 feet, WirelessHD can transfer full 1080p video without data loss.

LG will also integrate 3-D stereoscopic vision technology into its upcoming TVs. It will also move to eliminate motion blur in fast-action videos by shifting its models from 120 Hertz refresh rates to 240 Hertz, meaning that screens are updated 240 times a second.

The company also demonstrated high-definition terrestrial TV working on a mobile platform. Samsung talked about experiments with this technology a year ago, and now it looks like more companies are able to do it. No telling exactly when this technology will hit the market.

LG said its North American sales hit $13 billion in 2008, up 16 percent from a year ago. The company is selling a phone every second now. On the green side, LG expects to reduce its carbon emissions by 30 megatons by 2020. LG also has demos of solar-based cell phone charging stations at the show.

On the content side, LG is integrating CinemaNow, YouTube, Netflix and Yahoo widgets into both networked Blu-ray players and TVs.

All told, 36 models of TVs are being introduced. LG says its brand recognition keeps climbing, from 83 percent in 2007 to 92 percent in 2008. And the company says it will keep spending on research and development, as well as marketing despite the recession.